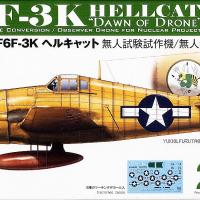 Shocking in the stark realism of perfected three dimensions...out of the muck and mystery of a hundred million years ago...up from the depths of unknown horror comes an abomination to confound science and terrorize the world. It''s ' Dawn of Drone ' !

While that might be a bit melodramatic and with apologies to the producers of 'Creature from the Black Lagoon' this release from Platz Hobby does illustrate beautifully (in scale model form) the beginnings of the use of drone aircraft in the early 1950's. Platz Hobby's 1/144th scale F6F-3K Hellcat depicts F6F-3K Hellcats used during the atomic weapon tests at Bikini atoll in the early fifties.

For a more detailed description I encourage you to click the link to an article by Dan Gettinger about those events and the early use of drone aircraft (Hellcats/B-17's) as research platforms. [The Drones of the Atomic Age (bard.edu)]

The 'Dawn of Drone' Hellcats from Platz Hobby come packaged as two complete kits with markings for five separate aircraft. Two in overall yellow and three in overall red. [Fun Fact: the tail section of some drone aircraft were painted different colors (blue, pink, green, etc.) to designate particular radio frequencies for the control equipment.] Probably to help the controllers keep track of which one was theirs. I can hear the conversation now...”Hey, Carl! Are you flying the blue one or am I?”

Each model consists of thirty-nine parts with petite, engraved panel lines and comes with some cockpit details. Those details include two styles of pilot headrests, an instrument panel with a decal for the instrument faces, and two types of canopy, one for a 'dash 5', the other for a 'dash 3'. (This boxing is a re-release of an early Platz Hobby offering of the Hellcat with some new parts and decals.)

The canopy glazing is provided as three parts: the main canopy and individual, clear bits for the side windows either side of the pilot seat. Very clever! You will need to attach those side windows before closing up the fuselage.

There are color call outs throughout each of the five assembly steps. One example of the Hellcat drones does have wing guns (a training aircraft) while the others will need to have those removed, simply a matter of clipping off the molded-on guns. While not a speedy build, this kit didn't take that long to assemble and the parts do fit together nicely.

There is a small decal sheet with star and bars, aircraft numbers, data /stenciling, and prop logos for the three bladed prop. Platz even includes decals for the anti-glare panel and wing walk area for select versions, a pretty extensive set of decals for this scale. The decals are well printed and go on without any difficulties. No muss, no fuss.

Painting these beauties is a snap. Whether you select a red Hellcat or a yellow one, everything gets painted the same color. Fuselage, wings , stabilizers,wheel wells, landing gear and doors, wheel hubs, fuel tank ...everything!.

After assembling the cockpit parts I brushed painted those bits with yellow citron. Maybe not the proper shade but more visible through the canopy. Aside from the kit supplied instrument panel decal not much else was done to the interior. I brushed painted the small bits (engine, interior of the cowl, propeller, gear parts, etc.) and air brushed the main portions of the aeroplane (fuselage, wings and such). The tail section was masked off and air-brushed a lovely shade of rose brown.

I have always been impressed with Platz small scale aircraft models This set (two complete kits) of Hellcats from Platz does not disappoint. The shape is spot on as are the petite engraved panel lines. The auxiliary fuel tank has three, individual anti-sway braces! Couple all of that with ease of fit and finishing, these kits are a pleasure to build and represent an important era in aviation. I mean , who can forget the Battle of Palmdale? [https://www.youtube.com/watch?v=yipdlyF9HP0]

My thanks to Platz and IPMS/USA for the review copy.