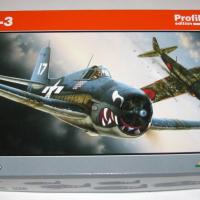 As there is enough on the history of this aircraft either in print or on the internet I will not go into it here. Suffice to say that the Hellcat is the most successful carrier based aircraft in history as 12,275 were built, 270 were lost and Hellcat pilots claimed 5156 kills in less than two years of ops.

Rod Lees (IPMS# 10821) reviewed this kit when it first came out a few years ago and the only things different in this boxing are 1) Resin wheels are included (Eduard BRASSIN), 2) The color of the plastic is now intermediate blue. Upon opening the box you will find 4 large & one mini sprue of intermediate blue plastic, 1 clear parts sprue, decal sheet, 2 photo etch (P/E) frets, resin wheels, canopy/wheel masks and a 16 page instruction book. The parts are very nice, typical for Eduard, but did have a mold seam line that was easy to clean up. The decals were nicely printed but my sample had a damaged national insignia (luckily not the one I was going to use).

It all begins with….the cockpit (you expected something else?) and this kit has a pretty busy one. It’s not 100% accurate but it does look nice when finished as roughly 35 pieces make up this assembly. Next is the engine and this too is very nice but a word of caution. Be careful adding the P/E wires as they are a little fragile (I broke two of mine). After finishing the cockpit you can join the fuselage halves together and there is a small problem area here. The seam along the spine is a bit difficult to clean up without damaging some of the detail so go slow and be careful.

After the fuselage you can work on the horizontal stabilizers, rudder and wings. The rudder only has two small points to connect to the fuselage and not wanting to bother with it I sanded those off, inserted heavy wire into it and drilled out the holes in the fuselage, worked like a charm. Each wing is a 6 piece assembly and as everything else so far went together easily. One small accuracy note here are the machine guns. In this kit all of the barrels are protruding but in all of the pictures I have of the -3 the outer most gun is flush, again an easy fix. You can now add the engine, cowling and attach the stabilizers & wings. Everything went together well but since the wings just fit into a slot on the fuselage I think I will add a spar for some extra strength through the fuselage on the next one. Does it need it? I don’t know but it will make me feel better!

On to the landing gear and wheels! Each strut is made up of 7 plastic and 1 P/E pieces and are nicely detailed. The BRASSIN wheels look great and the treads are well done but the front part or spokes of the wheel are solid and should not be which is too bad as it hides the detail in the wheels. After adding these you can finish up with the final bits like ordnance, external tank, light covers, canopy and antennas. Again everything fit very nice and the canopy masks were a joy to use which is saying a lot because I never really like using them! One thing to be aware of are the two small lights that go on the spine. Very hard to handle and I lost both of mine so I ended up using clear epoxy to make new ones.

You are given 5 marking options all in the USN tri-color scheme.

I chose #3 as it was still relatively new when it was lost (was with the unit less than a month) and still had the hastily applied number used for transport on its cowl. (In other words I wouldn’t have to weather it as much!) I used Testors Acryl for the Navy Blue& Intermediate blue and Tamiya for the white. The exhaust and gunpowder stains are from ground pencil lead. The decals, and there are LOTS of them, went on great with the exception of the two national insignias on the fuselage. For whatever reason they would not set down right. I’m not sure if it was something I did or it was the decals.

This was a fun kit to build and I recommend it to anyone with experience.

I would like to thank Eduard for providing this kit for review, the review corps for letting me build it and all of you for reading this.