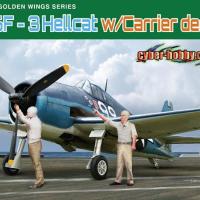 The F6F Hellcat, was a completely new design from Grumman for the U.S. Navy and U.S. Marine Corps. The F6F Hellcat, a single-seat carrier-based fighter is credited with destroying a staggering 5,271 enemy aircraft. In all, some 4,402 F6F-3 carrier-borne fighters were produced up until April 1944 before it was replaced by the F6F-5. This type first flew on 3 October 1942 and it reached operational readiness the following February with VF-9 aboard USS Essex. The fighter’s standard armament was six .50-cal M2/AN Browning machine guns plus six High-Velocity Aircraft Rockets (HVAR) mounted under its wings , while later aircraft had three hard-point’s capable of carrying 900kg of bombs.

Cyber-Hobby is offering aircraft modelers something different. The all new F6F-3 Hellcat fighter is supplied with a section of flight deck and crew to create an instant vignette. My sample arrived in the standard size box featuring a mild rendering of two deck-handler’s with the Hellcat on a flight deck. Also on the box top side panel are the typical CAD images and four tricolor U.S.Navy /Marine decal options.

According to the advertisement

I found the contents packaged in poly bags and intact. The parts are highly detailed, flash-free with only a few pesky injector pin marks. To note; the rudder and ailerons are separately molded. The clear pieces are nicely detailed but are a little thick. The flight deck is pretty nice and has beautiful scale planking. There is also a photo-etch seat harness that is quite impressive. Lastly, the decals options, they’re high quality even though the markings very similar:

I started in the cockpit area following the instructions and I soon had the kit well under way. Everything went well, I finished it out with the seat; it received a nice photo-etch harness courtesy of Cyber-Hobby/Dragon. An interesting feature is the kit supplies a oil tank bulkhead forward of the cockpit complete with the oil tank, engine bearers and an accumulator. The backside of the engine is also in this cavity. I suppose one could modify the kit by cutting open access panels to reveal these details.

Moving along and following the build sequence, I built up the engine and tail gear assembly. These component pieces went together pretty well then they were integrated into the fuselage with the cockpit. After successfully passing all test fitting standards I closed up the fuselage. The mating seam required a little filler to bring it up to snuff. I then added the tail horizontals and the rudder to complete this portion of the build.

Next, I set up to build the outer wings, inner wing box and landing gear bay. The wing box and inner structures parts built up nicely as did the outer wings. However, I found the trailing edge of the wings to be disappointingly thick but the thinner true to scale ailerons are positional, featuring pinned hinges. I decided to keep the wings unfolded. This proved to be the most challenging part of the build as the fit is awful with step issues when mating the inner and outer sections. I’m sorry I can’t comment on the folded option. The landing gear parts are mismatched in the instruction sheet but can easily be figured out. Also the belly tank straps are numbered backwards. I finished up by adding all the fiddly bits and prepping for paint. I had planned to pose the cockpit open but the open canopy doesn’t fit properly so I used the one piece closed option.

The Flight deck came in two pieces along with two crew figures all of which are very nice indeed.

Get one, you won’t be disappointed. I highly recommend it to anyone. My thanks to Dragon, Cyber-Hobby and IPMS for allowing me the opportunity to review such a nice kit.