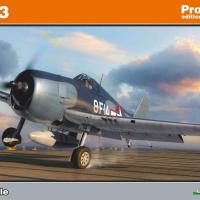 I don’t think that much needs to be said about the venerable Hellcat, the premiere US Navy fighter of WW2 (sorry Corsair lovers, I’ll admit to some bias here. When I started as a structural designer at Grumman many decades ago, some of my mentors had actually worked on this aircraft).

Eduard’s Profipack boxing of this little gem includes crisp moldings in light gray and clear styrene, two decal sheets (markings for 5 variants as well as a very full stenciling sheet in both black and white fonts), two sets of p/e parts (one of which contains their beautiful pre-painted etched cockpit parts) and two sets of canopy masks. As is common in Eduard kits, you’ll find some parts that are not used in the build, but this is made clear in the assembly booklet – full color, over 10 pages, including color profiles).

Like every Eduard kit I’ve built, putting together the ‘Cat is more an exercise in watchmaking than in modeling. Parts fit precisely, and you’ll need to break out the surgical tools to finish the cockpit in all its detail. I did notice one anomaly; both fuselage halves had a molding defect just aft of the wing root location, suggesting that plastic doesn’t flow into that area adequately or it’s shrinking during the cooling cycle. A bit of Mr. Surfacer 500 and light sanding hid the flaw.

Construction follows the instruction booklet; just be sure to pre-select the version you choose to build as there are a few non-standard steps involved. My chosen F6 incorporated a drop tank, this involves carving the appropriate opening into the lower fuselage halves (premarked, and easily opened with an X-Acto blade).

A few comments about the drop tank – when assembled, it incorporates a small wedge with two fill pipes. These are designed to sit flush to the fuselage wne the tank is installed, orienting it relative to the fuselage. One of these was broken off on my sample, so I cut the other one off, drilled holes in the “wedge” as well as the lower fuselage, and replaced them with Plastruct rod of the appropriate diameter. When installing the tank, Eduard has you mount four very delicate p/e partial tank straps. I chose to cut complete straps from a piece of lead foil, drill small holes in the fuselage, and wrap the foil around the tank.

One other area where I diverged from the kit instructions was to discard the plastic gun barrels (molded to an insert that fits inside each wing before assembly) and replace each barrel with steel rod of the appropriate diameter. I would have used hypo tubing but a search through the spares box came up dry).

I masked the canopy assemblies (more on that later) and shot the model with Tamiya White primer. I have better luck with the Gray primer for some reason, and although the white was a great undercoat for the AV white I subsequently airbrushed on the bottom surfaces, I seem to have problems with runs and bubbles. This came to haunt me when I peeled the canopy masks off and found the primer had seeped under the edges of each mask.

I masked the white sections with Tamiya tape cut with a scalpel and next shot the two shades of USN Blue, using Tru-Color paints. I may sound like a broken record, and Tru-Color has been a strong supporter of IPMS/USA, but these have become my personal favorite go-to paints due to their very fine grain, short dry time, and durability.

I used a sludge wash of Umber and Gray acrylic tube paints in combination with AV Dilutant and a drop of dishwasher detergent to define some panel lines, and gently removed the excess with damp paper towels and cotton buds. The vertical stabilizer antenna post came off in handling, a new one was made from sprue and I used nylon thread, tightened with a candle, to add the aerial. A coat of Testor’s Acrylic clear semi-gloss was applied to unify the surface.

Eduard provides two canopies – one for a closed cockpit, one for open. I used the closed section to guard the interior while painting with the intention of using the open canopy for display. For whatever reason, the open canopy – which should be wider – seems to be the same size as the “closed” canopy. I was able to force it down into place, but without gluing it, it pops back up (yes, I checked orientation, and checked that I was using the correct part number). So until I find a way to hold it in place, or gently spring it open with some heat, it’s sitting high, and you’ll see that in the photos.

Minor issues aside, some probably caused by me, this is a great little representation of the Iron Works premiere USN workhorse at its best. Thanks to Eduard for providing the review sample!

Sitting on its Box