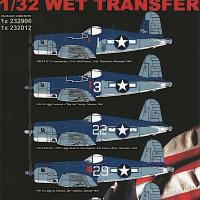 HGW Models has been putting out some interesting stuff lately, and this latest set of markings will prove useful to anyone (like me) who has a soft spot for Corsairs. In this second set catering to VF-17, five birds are presented, with all the bells and whistles, including national markings and full stencils.

The decals are clean and crisp with excellent registration, and copious documentation is provided, including all five aircraft in four-view drawings, which seems a bit redundant given then all five aircraft are very similar in appearance. Still, you can’t ding a company for being thorough. Separate drawings are provided for all interior and exterior stenciling, so if you screw this one up you’ve really got no one to blame but yourself.

This set of decals offers a technology that I haven’t dealt with before – “wet transfers” which are a bit more involved than standard decals, in that there is a final stage where the clear film is peeled from the decal, leaving nothing but the marking itself behind. Having never used any of these before, I felt obliged to give it a shot, installing a scrap decal on a sharply contrasting surface so I could see if it made any difference.

As recommended, I soaked the decal for the proscribed thirty seconds, laid it over some Microsol and swabbed it down, leaving it to dry overnight. The next morning, I peeled the clear portion right off, which was much easier than I expected, and was quite pleased to see that what remained met expectations and then some. There was no film left to silver or fuss with. The decal appeared painted on. I could very much get used to this.

I can’t help but hope that this eventually becomes a new industry standard, as the results are impressive, to say the least. In any case, I’d be shocked if any modeler worth his or her salt could find complaint with either these decals or the decaling method associated with them. My next Corsair is definitely going to sport these decals, and if my test was any indication, they’re going to look absolutely terrific on it.

My thanks to HGW models for coming up with this clever decaling technique and to IPMS/USA for a chance to test them out. Bon appetite!