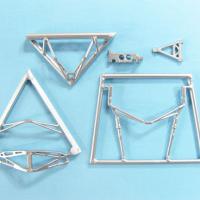 Scale Aircraft Conversion is known for making white metal landing gear replacement sets for numerous aircraft in multiple scales. I have reviewed a few of these sets before. Normally, the only advantages that I see are that these make for a sturdier model. However, this set I feel is different. The parts are exact replacements of the Airfix parts; instead of plastic, these are made of white metal. There really is no additional detail. The parts do not have the mold seams that the kit parts do, which is nice.

The reason I am very much for this set is that the Airfix parts are very finicky. What I found to be very useful of the SAC parts is the ability to bend slightly some of the parts so that you can fully assemble the landing gear. Once assembled, and thanks to the material (white metal), you are able to manipulate the landing gear so you get the perfect stance of your Wildcat!

The SAC Wildcat gear set will greatly ease your Airfix Wildcat build. Though the gear set does not really provide any additional detail, it does help you get all the parts aligned…especially if you goofed up the Airfix kit parts as I did! Thanks to Scale Aircraft Conversions for providing the detail set and for IPMS/USA for allowing me to review it.