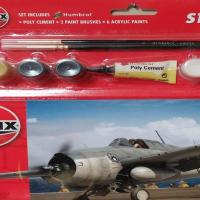 This is Airfix’s second boxing of its new-tool F4F-4 Wildcat. This is the same plastic that comes in the first Airfix release, but this release is marketed under the “Starter Set,” meaning it comes with some paints, glue, and two paintbrushes. The paints are Humbrol acrylic and include: Trainer Yellow Matt (No 24), Sea Grey Matt (No 27), Black Matt (No 33), White Matt (No 34), Gunmetal metallic (No 53), and US Light Green Matt (No 117). I tried the paints with the supplied paintbrushes, and although the brushes are not very fine, they did work well with the paint once mixed. Therefore, for someone new to the hobby, this kind of a starter set should actually be useful.

The Airfix F4F-4 Wildcat is, in my opinion, a nice kit. It looks like an F4F-4 and has some nice options. However, expert Wildcat fans will notice a few shape issues. Options include open and closed canopy, landing gear in extended or retracted position, tail hook in extended or retracted position, and an option to fold the wings! For this build, I went with the closed canopy option with the wings folded.

With the landing gear assembled, the build progressed smoothly. The open canopy option looks way to fat, which is why I went with the closed canopy. In addition, the detail in the cockpit is great except for the fact that there is no detail on the instrument panel, only decals are supplied. I used filler sparingly, but there is the potential that more will be needed if you do not trim the inside of the wing-to-fuselage joint. On both sets of wings (folded and unfolded), the plastic where it meets the fuselage is too thick. This is not a big deal if you are aware of it; if not, you will notice the wing does not mount flush to the fuselage.

Speaking of wings, the folded option looks neat. This is the option I chose. However, the attachment point for the folded wings is not that positive. The main issues that there is no way to attach the folded wing without continuously moving it so that the rear support mounts where it is supposed to as well. In most of Airfix’s new biplane kits Airfix includes a jig to attach the wings. I feel a jig of some sort for the folded wings would have been extremely beneficial! Alas, it is up to the modeler to do that on this kit. The final bits were the tail hook, prop, wheels, and antennas/probes.

The kit only includes markings for one aircraft in the Atlantic scheme. This was precisely the scheme I wanted to model! The decals went down very well with the help of warm water and Micro-Sol/Micro-Set. A final panel line wash and light weathering helped wrap up the finish.

Once I obtained the SAC metal landing gear, this build went relatively smooth. I really like the option to have the wings folded, but doing so is not without a little frustration. There are those who say there are some slight shape issues, but it looks a lot like an F4F-4, I feel it has better detail than Hasegawa’s kit, and if you build it with the wings out and follow the instructions closely, you will have a smooth, relaxing build! Thanks to Hornby USA and Airfix for providing the kit and for IPMS/USA for allowing me to review it.