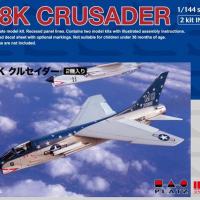 Platz has re-released their F-8C kit as a dual build F-8K/F-8A---molded in light gray plastic with excellent detail and recessed panel lines. Two complete kits are included in the box, with three choices of markings. A little reference material comes in handy, as a couple clues on the kit are subtle and the instructions, though complete, are in Japanese except for the part numbers and color callouts. Some parts in the kit aren't for use on the A and K variants.

The kit has a pretty nice cockpit tub, instrument panel, and good representations of the Martin-Baker ejection seats to which I added some masking tape straps. Before I started the build, I decided to do one of the kits OOB and detail the other one---after all, what's a Crusader without the wing up, flaps down, droops out, and other stuff? It was a simple matter to separate the trailing edge flaps, and to remove the leading edge droops from the upper wing only. I didn't separate the droops from the lower wing---just scored a line on the inside surfaces and bent them down into the "extended" position. When I glued the upper wing, the flaps, and the "upper droops" in place, it was easy to just fill the resulting gaps on the top surfaces (Photo 3). Before I joined the fuselage halves, I white-glued some bird shot into the nose cavities to make sure they wouldn't be taildraggers. Might've been unnecessary but I didn't want to take the chance.

The kit's an easy build, and the only filler needed was on the lower fuselage seams (and of course, additional filler on the surgically-altered A model wing where I'd separated its parts). I found out too late that the windshield and the radome didn¹t fit together very well and putty was needed there, too, but this was my fault, not the kit's. So here's the gouge for future Crusader builders: dry-fit the canopy in place and then cement the radome in place, matching it up to the base of the windshield. Then you won't have to fill and sand that area (like I had to do) when you get around to installing the clear part permanently.

Two nice sprues of AIM-9's and Zuni pods with Y-racks are included. The instructions' notation to use parts A3 and A4 for the rack pylons is wrong---they're parts B3 and B4. A couple of nice Bullpups and underwing racks are included too, but those went into the spares box since they're not to be used on these variants.

I separated the F-8A clear part and vac-formed a new canopy so I could pose it open, which actually turned out a little better than the closed canopy on the F-8K, as there was a little fit problem on its right aft side (made less obvious by the blue spine on that model). Using a little sleight-of-hand, I made a speedbrake out of sheet plastic and cemented it to the F-8A belly in the "drooped" position, with black decal on the belly underneath it to give the impression of depth. Up close it's apparent that I "cheated", but from a distance it looks OK.

I disagree a little bit with the painting instructions for the F-8A; they show the horizontal stabs gray, but the time period specified for this variant falls under the Navy's February, 1955, paint specs which call for horizontal control surfaces to be painted white. The gray rudder depicted on the instruction sheet is correct, though---these weren't painted white until the December, 1961, revision to the specs was issued.

The excellent Cartograf decals give three markings choices---the third option is a fly-by-wire test bed F-8K from the Dryden Research Center, in overall white with blue trim. All the decals fit really well on both kits, though the star-spangled spine on the F-8K needed some TLC and time to get all the pieces to match up. And this leads---as Paul Harvey used to say---to the "rest of the story".

I'm not generally one to document my own stupidity, but if to err is human, boy, I was the Poster Child For Humanity during what should've been the finishing touches of this build. All I had left to do was to use a few tiny dabs of dark blue paint on the F-8K to fill in where the decals met---and I STILL don't know what happened---but all at once I saw blue spatters and droplets all over my nice paint job.

Oh shucky darn. After cooling down and a big sigh later, I put things aside to dry because wiping off paint drops would just smear things and might even take the gray and white acrylic right back down to bare plastic.

This was intended to be a kit review, not a how-to article---but for those who might glean some useful information from how I kinda-sorta fixed the model, read on.

Once the blue drops had dried, I scraped the big ones down with the point of a sharp blade, then sanded down the resulting roughness as smooth as I could. Then it was a simple matter of re-masking and re-spraying the white and Gull Gray.

Well, almost simple. Since I'd already put the decals on, I had to be extra careful that I didn't overspray them or pull them up with the masking tape, so I used thin strips of vinyl tape to outline the areas to spray, and lots of paper held in place with low-tack drafting tape. That sounds fairly simple, but given the small size of the model, that meant some finesse was needed. When I painted the gray, I masked along existing panel lines, so that if it came out a different color than the first base coats, it wouldn't stand out as much. Or at least it'd appear like I meant for that panel to be a little darker. Well, maybe.

Not a perfect fix, and it won't win any contests, but passable.

Great little kit and highly recommended. Many thanks to Platz and to IPMS/USA for the opportunity to review this neat offering.