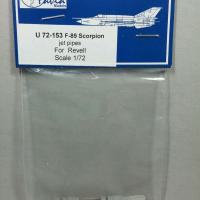 Revell’s 1/72nd F-89D/J came out in the early 90’s and is a great kit. There are really only two shortfalls of the kit; the first being the lackluster cockpit and the second being the multi-part exhaust/jet pipes. Pavla has recently released resin detail parts for the cockpit and the exhaust.

The resin jet pipes consist of only two parts, one per engine. These are simple replacements for the multi-part kit versions. There are no instructions, but it’s a relatively cut-and-dry process. There is a small pour stub on each part that will need to be removed. Afterwards, you’ll need to thin out the inside of the Revell fuselage in the area where the jet pipes will go. Once you do that, these parts slip right in. Unfortunately, I did not realize the kit would need alteration until after I had painted the jet pipes. As such, some sanding and test fitting resulted in me marring the paint on my Pavla jet pipes. This is not a big deal as I can easily repaint them. However, with this knowledge in hand, your build should be much easier.

This is a great addition to the Revell F-89. These parts are near perfect and replace the fiddly Revell parts.

Thanks to Pavla for providing the review sample and to IMPS/USA for allowing me to review it.