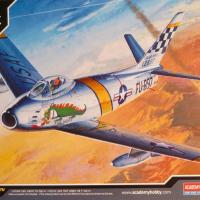 Development of the F-86 actually started before the end of WWII, initiated by North American Aviation. Using captured data from the design of the ME-262 showed that a swept wing was the only way to fulfill an Army Air Force requirement for a 600 mph speed for the new design. Progressive modifications led to the fighter that effectively countered the threat of the Mig-15 during the Korean War.

The kit comes as three sprues of light gray plastic, along with one clear sprue. Parts are cleanly molded, with engraved panel lines and no flash. Cockpit detail consists of raised details on the instrument panel and side consoles, a three piece pilot seat, and a control stick. There is nice detail on the wheels, wheel well interior, and the inside of the speed brake wells. The interior of the wheel well covers and speed brakes themselves also have well detailed surfaces. Rounding out the details are several pieces that complete the interior at the rear of the canopy.

Instructions consist of nine steps on a double sided 8-1/2 X 19-1/2 sheet. There is also a supplemental small sheet with decal placement/painting information. Paint colors are listed by name and FS numbers with a cross reference chart for six different paint brands. Rounding out the paperwork is an absolutely gorgeous decal sheet from Cartograf. More on this later. Marking options are for any of three natural-metal F-86s from the 51st FIW in Korea during the early 1950s. I chose to model the plane flown by John Glenn.

Construction begins with the pilot seat and cockpit interior. Here there is some confusion because the instructions would have you cement the two side consoles to the floor, but these come already molded as one piece. Further differences show up when you are to install detail pieces on the rear canopy deck; these are also already included on piece C10. There’s nothing that a modeler with some experience can’t figure out, but it’s a little distracting. I’m guessing that the instructions were copied from a kit in a larger scale that doesn’t have the same exact parts breakdown. This may explain why the sprue maps in the instructions don’t exactly match the kit. On the plus side, there are a couple of extra parts not mentioned that look like FOD covers for the engine inlet and exhaust for anyone who wants to add these. I chose not to.

Parts breakdown is conventional with a three-piece wing and two-piece fuselage. The engine air inlet trunk parts have locator pins that show up in the interior in the front and rear of the duct. I wasn’t sure if the front pins would show when looking into the front of the plane, so I filed those out just to make sure. The fit of everything was good with only a little putty required in a few places. Most of the work was in the inlet duct, filling and smoothing a slight gap between the front cowling and the interior of the duct. Panel lines didn’t match at a couple of places on the fuselage halves, so these had to be filled and re-scribed. The only other difficulty was with the front windscreen. For some reason, the panel lines were raised features on the interior of the screen, which made it difficult to cut the masking when painting the framing. I cut tape to give narrow framing, but after removing the masks, you can still see the panel line on the inside. If I were building this kit again, I would sand off the interior lines and repolish the windscreen.

I used Floquil Bright Silver for the finish, followed by a coat of Pledge Future. After applying the decals, I sealed them with another coat of future before accenting the panel lines. I had never done this before to panel lines on a natural metal finish, but I want to compare this with un-accented lines. My pin wash was my standard of Reeves oil colors thinned with mineral spirits and applied with a fine brush. If the Future is given 12 hours or more drying time, the mineral spirits don’t seem to bother it. After waiting several hours, I wiped off the excess wash with a dry cotton swab. Finally, I sprayed a semi-gloss mixture of Testors Gloss Coat and Dull Coat (50:50 ratio) over the decaled areas to cut the shine for a more realistic appearance.

The decals for this kit are some of the best I have ever seen. The colors are perfectly in register, the colors are accurate, and best of all the clear carrier film stops right at the edge of the colors, so there are no worries about the markings blending into the finish. Micro Set and Micro Sol let the decals settle nicely into the panel line recesses. Stencils are provided to give a very realistic replica, although it took me about 5 hours over several sessions to apply the roughly 114 separate markings.

Overall I spent about 25 hours on this kit, a little less than normal because of the good fits and uncomplicated nature of the F-86. I would recommend this kit to anyone who wants a nicely detailed model of an iconic early Air Force jet fighter. My thanks to Model Rectifier Corporation and IPMS for providing this kit for review.