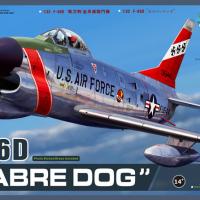 Permit me to open this review with a personal story.

My childhood home town of Iowa City had a tiny little airport – the kind that sees maybe six Cessna's visiting in a week. However, even this tiny airport managed to have a gate guard, in this case an F-86D Sabre Dog donated from the Iowa Air National Guard, mounted on posts.

Unfortunately, it wasn’t in the best of shape. At some point in the past it had lost its canopy, which had been replaced by some artlessly shaped acrylic sheet. Even so, it seemed to a kid like a proud giant, reaching endlessly for a sky it would never touch again. Honestly, I loved that gate guardian.

Unfortunately, in my college years an overzealous city beautification committee, led by a councilwoman with no interest whatsoever in history, decided to remove the “eyesore” without clearing it with the rest of the city council. They removed it from its pedestal, dumped it onto a flatbed truck, and sawed the wings off with a buzzsaw to make it fit. Predictably, the city council went ballistic when they discovered this stunt, and insisted that the councilwoman replace the plane immediately. Unfortunately, it was damaged beyond repair by then. So much for beautification schemes.

Anyway, the F-86D Sabre Dog has had a special place in my heart ever since, and the advent of the Kitty Hawk model in 1/32nd scale finally has permitted me to add it to my collection in my favorite scale.

The differences between the previous Sabres of the 1950s and the Sabre Dog are pretty obvious; they installed an all-weather radar in the nose and changed the armament from the barely-adequate six .50 cal machine guns to a pop-out pack of unguided artillery grade missiles. Unlike the F-86 Sabre, the Sabre Dog was never intended for dogfighting, being specifically designed to take down intercontinental bombers.

Kitty Hawk has finally brought this iconic aircraft to the large-scale enthusiasts, and it’s a sweetheart of a kit. Included is a construction booklet with full color decal placement pics. Just beginning with the ejection seat, you’re presented with a multipart assembly along with photoetch harness that make a detailed representation of the real thing – far cry from the old Hasegawa F-86 in the same scale. The kit includes drop tanks and Sidewinders not frequently seen on U.S. aircraft, but sometimes observed on foreign examples. It also includes a full engine with trunking as well as the nose radar if you’re into showing internal details off. I was particularly charmed by the extendable rocket pack, which shows off the aircraft’s primary armament to good effect.

Assembly began with the cockpit, and a significant issue cropped up almost immediately. For some reason this kit is festooned with standing pin marks, sometimes in the most awkward locations. The ejection seat alone had three of them. For the most part, the modeler should remove these as they will inarguably interfere with assembly. That being said, on the whole they are on inside faces or are otherwise hidden from view. However, some may be more troublesome, like the forest of these on the inside of the engine ducting, which are visible through the nose. Fact is, you will have to examine virtually every piece for these little spoilers.

Assembly proved more challenging than I’d anticipated, as despite the good instructions, there is little positive positioning on a number of assemblies. The front wheel well, for instance, features a plentitude of parts to form the side walls, which increases detailing significantly, but since there was no real positioning data, most of the assembly had to be done by eyeball, leaving me quite uncertain as to whether it would fit properly in the fuselage when it all came together.

In fact, it didn’t. First, when installing the cockpit I found that the little side panels interfered with the main control panel, and had to be removed before I could successfully install this in the fuselage. Next, when installing the lower front fuselage, I discovered that my installation of the front landing gear bay was incorrect. Instead of installing the panels on top of the indicators on the intake floor, they were supposed to install inside the markers, requiring a major redo. However, this didn’t prove to be the disaster I was fearing it was going to be. Instead, snapping the pieces off and reinstalling them correctly took a matter of a few minutes.

Generally speaking, assembling the fuselage still turned out to be something of a frustration. Although I’d intended to leave the engine out so I could super detail it as a separate item, it turned out there was no easy way to attach the tailpipe to the rear fuselage without it. Consequently I had to install the entire engine, meaning that all that work was never going to see the light of day, alas.

Attaching the rear fuselage was a major headache. With the front fuselage bulkhead installed, the rear fuselage was simply a butt joint, with no guides of any kind to ensure a clean fit. I don’t know whether or not it was my own build, but when I could wrestle the upper joint into something approximating an alignment, it left an appreciable step in the lower joint. Ultimately, I had to sand this down quite a bit, destroying a good deal of the fine surface detail in the process. I don’t know what I could have done as an alternative assembly, however, as the front fuselage is composed of four large pieces, none of which are a particularly good fit. Maybe deleting the engine bulkhead and inserting pieces of scrap plastic as tabs between the front and back would have been more effective.

In any case, none of the main fuselage pieces fit all that well, the nose piece least of all, necessitating a fair amount of filling and sanding, which meant losing a lot of really beautiful surface detail, a particularly aggravating situation when planning on a bare metal finish. I was surprised to see that some of the pin marks I noted on the inside of the intake were clearly visible on final assembly. I’d been hoping these wouldn’t be visible, and cleanup of my mistake was particularly time consuming. On a positive note, however, even with the nose lip attached, there is still a large hole in the nose where the radar installation goes, permitting one to install weights late in assembly to prevent tail sitting. Important note, however – the radar assembly sits on a plate featuring a large open hole in the center, so you might want to back that up if you intend to display this detail.

The wings proved a somewhat better fit, although there was still some filling to be done. Be aware that the upper wings need to be installed first in order to fit with the main landing gear wells. Also note that the mounting of the external pylons are not punch-out holes, meaning you may have fill a few depending on the external load your particular aircraft carries. Unfortunately, the tail fin is also not a terrific fit, necessitating some filling along the bottom.

Once again, though, I’m not sure whether or not the fit problems I encountered at this stage had something to do with my uncertainty during some of the earlier assembly steps. I would strongly recommend taking your time and doing a lot of test fitting before committing to glue. Some of the slots are too small for the tabs, and you don’t want to discover this at the last minute.

My issues with the loose fit got a bit more complicated when installing the landing gear. The front wheel bay, correctly assembled now, no longer fit the nose gear. I had to trim down the mounting tabs considerably to squeeze it in. The main gear, which have separate, two-part mounting pintles, were such a loose fit that I wound up mounting the pintles separately, then aligning the landing gear carefully with the fuselage using the old Mark 1 eyeball.

Finally coming down to prep assembly, I stuffed the space behind the nose with solder to make it sit properly, forgoing the pleasure of displaying the radar assembly. Once again, no provision had been made to permit the nose cap to be removed and reinstalled.

Once done with all that, I proceeded with the painting and decaling. Kitty Hawk has provided comprehensive decals on two sheets for its plethora of finishes, and these are whisper thin, laying down beautifully over surface detail. They also have a feature I’ve never encountered before. On any decal featuring letters or numbers, like “U.S. Air Force,” all the letters are attached to each other by mere strips of film – just enough to keep the letters “marching in formation” as it were. This immediately reduces silvering issues to a minimum. However, the down side of all this is that the decals are extremely fragile, with a tendency to want to fold over on themselves. I lost a good number of markings to this propensity, unfortunately, so I strongly suggest care in application. Still, despite this issue I’m very impressed by the quality.

In the end, I find myself quite pleased with the result – a fine model of an aircraft which has always had a special place in my heart. Admittedly the model was considerably harder to complete than anticipated, largely due to the vague placement of so many parts as well as the numerous pin marks. It is more challenging in this respect than perhaps it should be and due to this, I recommend it to modelers who have some experience under their belts..

Notwithstanding, the final result is pleasing to the eye and gives me real pleasure to add to my collection. I look forward to the upcoming F-86K with eager anticipation.

Thanks to Kitty Hawk for offering this fascinating model for review and to IPMS/USA for their patience and forbearance in letting me tackle this one.

And the engine added