F-84E/G Thunderjet in Service of the (R)Neth. AF - History, Camouflage and Markings 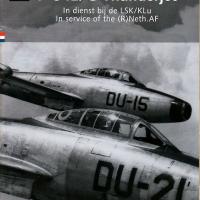 In US service, the F-84 Thunderjet experienced early problems, but the E and G models proved the validity of the design. With its straight wing, it was very stable and was a great fighter-bomber. It is well known from its exploits in Korea. A portion of the F-84E production was exported to NATO to provide them with a modern jet attack airplane. When the greatly improved F-84G entered production, a majority of the production was exported to NATO and other countries.

This book provides complete details of the F-84E and F-84G in the service of the Royal Netherlands Air Force. The book is written in Dutch and English. The first half of the book is in Dutch while the rest of the book repeats the information in English. Different photos are included in both halves but all photos feature descriptions in both languages. Twenty-four profiles are provided along with four plan-view drawings.

The book provides some brief history of the development of the F-84 and then goes deep into its usage with the (R) Neth AF. It covers the training of Dutch pilots and then covers the usage of the airplane in its various squadrons. A listing of all of the 187 Thunderjets used by the (R) Neth AF is given along with the associated nose number, when available, and the final disposition of each airplane.

I enjoyed this book very much. I am a fan of aviation history and small air forces. As a modeler, the book also provides lots of interesting natural metal color schemes. As a supplement, Dutch Profile also separately offers sets of decals in 1/32, 1/48 and 1/72 scale. The decal sheets offer markings for 18 different Dutch schemes from the book.

The book is well recommended. It can be ordered directly from the publisher as well as from Hannants and other book sellers worldwide. I would like to thank Dutch Profile Publications for providing the sample for review and IPMS/USA for the opportunity to review it.