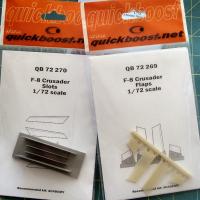 They are both nicely molded with the slats in Quickboost’s standard grey and the flaps curiously done in cream resin. I suspect the reason for this may be that the different type of resin makes the extremely thin parts possible; the flaps are really quite thin which is a good thing. Each of the parts must be removed from the casting blocks with a saw which is easy enough, but must be done carefully given their thin fragile nature. The parts are well formed as is standard from this manufacturer.

Pictured here are the kit parts, the subject Quickboost sets and a set produced by Wolfpack for the same purpose. Wolfpack actually sells both flaps and slats in one box, which I suppose makes it easier to throw the whole lot in the trash bin where they belong. The Wolfpack set is poorly made with warped parts that don’t even come close to fitting. As George Costanza once said, "don’t they know about shrinkage?" Furthermore, my example of the Wolfpack slats were split at the panel line along the leading edge

All is not entirely perfect with the Quickboost slat set however. They are not quite long enough. The pictures attempt to show the deficiency in size. The surface detail is very nice, but the modeler would have to lengthen them to get them to fit correctly which would be a bit of an undertaking indeed. Given that the kit parts are separate items, this reviewer found that it will actually be easier to modify the mating surface of the kit slats with some plastic strip to create the correct angle than to modify the length of the Quickboost set. The Quickboost slats are actually handy as a reference for creating the correct angle on the modified kit parts, but the length issue really lets them down. Sadly, for this reason, the slat set is not recommended.

The flap set, on the other hand, is superb and fits well. The fact that they are sold separately is fortunate as the flaps are a useful improvement and are recommended. As mentioned, they are beautifully thin and sharp and are suitably rounded at the back end to replicate the parts in the lowered position. The flaps molded on the kit wing must be sawed off and the replacement parts fit precisely in the remaining space, causing the reviewer to scratch his head in bewilderment as to why the slats just don’t fit. Perhaps the review sample was a bad copy that suffered from shrinkage or maybe the parts are the right length per the original and the kit has it all wrong. Either way, the slats proved disappointing, but the flaps are superb.

There is a tight fit between the inboard flap and the side of the fuselage when the wing is placed on top, so it is suggested that the wing be fitted and then the flaps so that everything can be adjusted to fit just exactly perfectly. A caveat here; the reviewer is no Crusader expert so the accuracy of the angle of the flaps when fitted can not be confirmed, but they look good to the Mk.I Eyeball in comparison to photos.

My thanks to Quickboost and IPMS/USA for the chance to review these items.