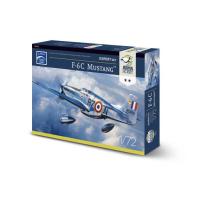 The P-51 Mustang was an excellent fighter, but it also proved to be a universal photo-reconnaissance plane. Its performance: speed, ceiling, armament, and great range meant that it could efficiently reach a distant target, photograph it and safely return to the base. To become a long-range aerial spy, the Mustang, unlike, for example, the Spitfire, required only the installation of photographic equipment.

The concept of the Mustang fighter appeared as a result of collaboration between the RAF and the American industry. North American Aviation factory, which had been offered to license-produce Curtiss fighters, preferred to propose their own design. The first versions of the Mustang, powered by an Allison engine, were effective on the low-to-medium altitudes, agile, solid, and well suited for mass production. The breakthrough was the installation of Packard Merlin engines, manufactured in the USA under the Rolls-Royce license, which ensured excellent performance also at higher altitudes. The resulting version - P-51B/C Mustang - was capable to fly from England to Berlin and solved the problem of escorting the daytime bombing raids on Germany. Production of the new version was carried out at the North American factories in California under the designation P-51B-NA and in Texas as P-51C-NT. A total of 3,738 of these aircraft were produced. As many as 900 of them, as Mustangs Mk III, were transferred to the RAF and to the Polish Air Force, RAAF, RCAF, and Free French. They appeared in Europe at the end of 1943, they also served in the Mediterranean and the Burmese-Chinese theatre of operations. From mid-1944, they were gradually replaced by the more advanced P-51D/K.

The reconnaissance Mustang F-6C was a modification of the P-51B/C fighter. Most of the F-6Cs were built at the North American factories in Dallas and differed from the fighters produced there mainly in the openings for installing a camera. Photo equipment was installed at modification centers in Love Field and Kansas City. 230 serial F-6Cs were produced this way. In addition, more than 50 P-51B/C fighters were converted into reconnaissance planes in overseas depots and combat units. The reconnaissance Mustangs performed well both for high-altitude missions with a vertical camera and for low-level tactical reconnaissance using an oblique camera. Their armament also allowed them to engage in equal combat with enemy planes. They were used by the US Army and Allied Air Force in European, Mediterranean, and Far East theatres of operations.

Originally released in 2021 as a new-tool P-51B/C, Arma Hobby’s F-6C is the same kit with reconnaissance-specific decal markings. The 2021 release did, in fact, include an option to build an F-6C, including the cutouts and lenses for the oblique and ventral camera ports. Having built the P-51C release, I can state with great confidence, this is the most detailed kit I’ve ever built in 1/72 scale. Somehow, the designers at Arma Hobby have figured out a way to make a 1/48 scale cockpit fit into a 1/72 scale model. The airframe, as well, is finely detailed.

“Expert Set” denotes the fact that a PE fret and canopy/wheel masks are provided. The canopy and wheel mask are no longer the gray vinyl that the P-51B/C kit had, they are now the yellow “Kabuki Tape” style that most modelers are familiar with. A big improvement, in my opinion.

The surface detail on the kit parts is amazing. Numerous and delicate, the riveting and panel lines will really stand out under an oil wash upon completion. The finish of the plastic parts is smooth and satiny. The only criticism I have of the kit is, the sprue gates (attachment points) are pretty heavy, even on the most delicate parts. Care is needed in separating the parts from the sprue runners, with some cleanup inevitable.

Cockpit detail is abundant and gorgeous. A fair amount is molded to the sidewalls, with separate throttle quadrant, oxygen supply system, and trim tab control column. There’s even a separate part for the First Aid kit behind the pilots’ head! Seat harnesses are photo-etched parts, with decals to cover them (I painted mine). You could always just use the decals, as well. There are a couple sink marks on the sidewalls, but once the cockpit is assembled and buttoned up, they can’t be seen.

The one-piece main wheels are lovely, with delicate tread patterns and raised lettering. The flaps are provided separately, and are designed to be in the deployed position. Photo-etched parts include seat harness straps, radiator intake and rear radiator face, as well as side brackets for one of the seat options..

As with most aircraft kits, construction begins with the cockpit. I’ve already discussed the high level of detail here, so just rest assured everything assembles easily. Some parts cleanup is due to the heavy attachment points, but everything fits well. The majority of your time in these steps will be spent painting and decaling the details.

The tailwheel well is attached to the fuselage sidewalls, and the tailwheel itself is installed before closing everything up. I generally don’t care for this type of arrangement, as the tailwheel can be easily broken off. No mishaps for me on this project, so I’m happy with it this time. The oblique camera port is now drilled carefully into the port fuselage half. The completed cockpit & instrument shroud is attached to the starboard fuselage half, and everything gets buttoned up. A small amount of filler was required along the supercharger intake trunking.

The radiator/exhaust gas assembly includes two PE inlet faces. The ventral camera port must be carefully drilled out in the “roof” of this subassembly, and the clear lens is installed and masked off.

Next comes assembly of the wings. No surprises here, just be sure to drill out the holes which the hard points will attach to. The flaps, which are designed to be deployed, were left off until after painting was complete. Assembly of the fuselage and wings results in a gapless, perfect fit. Two types of tails are included, filleted and unfilleted, depending upon which markings you decide to use. After this, the directions have you build and install the main landing gear, followed by lots of final detail parts.

I tend to leave the gear off until nearly last, which allows me to insure they’re as symmetrical as possible. Additionally, the clear parts were installed and masked before painting. If you choose to use the Malcom Hood canopy, mind you, the fore and aft edges were not metal frames. Rather, the clear plexiglass was “rolled” to fit the windscreen.

The decals are produced by Tech Mod, and are in perfect register. They responded perfectly to Mr. Mark Softer & Micro Sol. One of my favorite things about this kit is the multitude of cockpit placards and stencils. These really bring the Braille Scale cockpit to life. Some patience is required applying them, but the effort is worth it. The instrument panel is supplied as two decals that go over the raised detail plastic parts, and looks stunning when completed.

The model was primed with several light coats of Future floor polish, sprayed through an old Iwata HP-C. I find that the self-leveling properties of Future fills in any microabrasions nicely, and the acrylic surface gives paint something to adhere well to. Tamiya Medium Gray and Mr. Hobby Aqueous Olive Drab were used. The pre- and post-decaling gloss coats are Mr. Color GX-100. Ammo by Mig Matt Lucky Varnish dulled it all down after a few oil washes.

Arma Hobby has really set the bar high for 1/72 scale kits. The level of detail and ease of assembly really make these kits an enjoyable, fun project that yields incredible results. I highly, highly recommend this kit to you. My thanks and gratitude to Arma Hobby & IPMS.USA for this review sample.