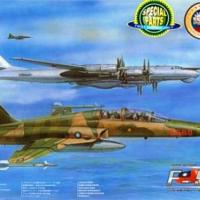 Built at a time when US fighter aircraft were getting more complex and expensive, the Northrop Grumman company decided to go against the grain and build a lightweight fighter based on their successful T-38 Talon design. The first F-5 Freedom Fighter flew on July 30, 1959. It proved to be a very nimble and adaptable aircraft but it was never widely adopted by the USAF. It did find willing operators in the several foreign air arms including the Republic of China (ROC) also known as Taiwan. The island nation produced their own licensed built F-5s including 66 of the two seat F5-F models. This kit presents four aircraft of the 46th Aggressor Squadron. As the name implies, this unit trains fighter pilots in air combat maneuvering by engaging in mock combats, recording the results and using those recordings to teach pilots how to prevail. In spite of the mission these aircraft are assigned, they are still fully operational fighters capable of deploying missiles and ground attack ordinance. Largely replaced by F-16s and Mirage 2000s, the ROC F5-Fs are nearing the end of their service.

This is a reissue of a kit that’s been around since 2011. The box art shows an intercept in progress and the kit includes a frameable print of the box top. Seven sprues molded in light grey plastic contain the airframe. You also get a clear fret, and photo etched fret. The instructions give a brief history in words as well as drawings showing the differences in the F-5 family. A color cross-reference guide includes Gunze, Humbrol, Revell and Lifecolor paints. The four marking options are presented in black and white. For additional reference, the box sides show color profiles. A decal sheet and some vinyl washers round out the box contents.

As is customary, the cockpit is the first subassembly. It builds up real nice but there are no seat harnesses included. I was particularly impressed by the way AFV engineered the canopy actuators if you wanted the canopies open. In short, it's impossible to mount them at the wrong angle. With careful painting the kit cockpit with the addition of some seat harnesses would be fine. For this build, I chose to use the AIRES F-5F Tiger II cockpit set #4551. That set is reviewed in a separate writeup. Surface detail and fit are very precise. So much so that if something doesn’t seem to fit, you probably don’t have it positioned right. Intakes are hollow but you'd have to look really hard to see in there anyway. The drop tanks include the use of vinyl gromets that allow them to be removed from the pylons. The only tricky part was the mounting braces that attach the main gear doors to the struts. It took a bit of studying the instructions and fiddling with those parts to finally get it right.

As tempting as the camouflage schemes were, I choose the all silver “red 5385” because I thought the markings would show up better on the light background. For the airframe, I used a base coat of Tamiya semi-gloss black lacquer decanted from the spray can and run through an airbrush. For the finish coat I used Alclad RAF High Speed Silver. I then used some other shades to delineate the hot section of the tail and exhaust. The nose is Light Ghost Grey. Things were looking good as I prepared for decal application. The first sign of trouble was how long time it took for the decals to separate from the paper after the recommended 15 second dip in warm water. Once they did release, I found them very brittle and difficult to conform over curved surfaces. Once dry, the carrier film is completely visible and silvers, even on a glossy surface. I finished up the build with landing gear, speed brakes, canopies and antennas.

So, is this kit worth your time? I would say yes, the plastic is nicely done and fits with great precision. It would have been nice if AFV had included some seat belts on the PE fret, but you can get belts or complete seats as aftermarket items. The decal sheet is unusable. Save yourself the anguish, toss it out and find an aftermarket substitute. Except for the decals, I recommend this kit. Thank you to AFV for the sample kit and IPMS for sending it my way.