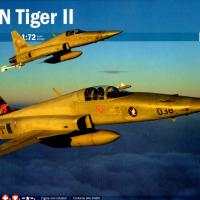 In the mid-fifties, Northrop Corporation started the development of a lower cost, light weight, high performance fighter airplane. The impetus for the program was potential sales to allies under the Military Assistance Program. Initial US interest was in the trainer version of the program. This resulted in the T-38 Talon supersonic trainer. This was a great looking, high performance airplane. I loved watching them fly out of Luke AFB. The initial fighter version, the F-5A followed in the early sixties and had significant commonality with the T-38. This aircraft was sold to various allies and in fact, was built in some of the countries – Canada, Spain and the Netherlands. In the early seventies, the upgraded F-5E was developed. This version included better radar systems and armament, a larger fuselage due to improved engines and additional fuel capacity, increased wing area and the addition of maneuvering flap system for improved air to air performance along with other minor changes. Even with all of these changes, the F-5E would retain 75% commonality of tooling with the original design.

The F-5 family has been operated by about three dozen air forces around the world along with the USAF and USN for aggressor aircraft training. In 1974, Switzerland started the process of purchasing the F-5E and the two-seater F-5F, for the Flugwaffe. A number of these aircraft remain in use and are expected to remain there until 2018. For those of us who enjoy modeling small air forces aircraft, the F-5 is a source of lots of different markings.

This F-5 kit has been released to showcase special tail markings that were applied in 2008 by Fliegerstaffel 19 of the Swiss Air Force to commemorate their 75th anniversary. The kit also includes markings for a basic Swiss model, an Austrian Air Force plane and a U.S. Navy Aggressor aircraft. The instruction drawings indicate that all three versions should be designated F-5N. This is not completely correct. The F-5N designation was applied to some F-5E models that were purchased by the US Navy from Switzerland for their aggressor training program, thus, the US Navy airplane is an F-5N while the Swiss and Austrian models are F-5Es.

The tooling for this kit has been around for many years. The kit has been re-released several times with different markings. Surface detail consists of finely raised panel lines and the shapes of small parts are not too crisp but the model seems accurate and I did not encounter any flash on the parts.

Construction starts with the cockpit. The instrument panel has depressions for the instruments and requires careful painting. No decals are provided. The ejection seat is two pieces but the detail is good and it paints up well. A decal for the seat belts is included to improve the appearance. The next step is to close the fuselage with the horizontal stabilizer trapped between the upper and lower parts. When the vertical stabilizer is added, the basic model looks almost complete. Various lumps and bumps are then added along with the air intakes and exhausts. At this point, after closing the gear openings, the model could be displayed in a flying display.

To fully complete the model, the landing gear and armament are added. The landing gears have lots of molded-in detail but the plastic seemed soft. One main gear broke for me. They need to be treated carefully. Three fuel tanks, two extra pylons and two wing tip sidewinder rockets are provided. I checked out some photos of the commemorative model and found that only the center fuel tank was used and it did not appear that wing tip missiles were carried. They are listed as optional on the plans.

The size and basic shape of the model are correct. The only shape problems that I could see is the nose that looks slightly too wide at the tip and the wing leading edge extensions which seem to be extended too far forward.

I love Small Air Forces as well as special schemes applied to various aircraft. For this reason, I chose to build the commemorative scheme model. I found some great photos of this scheme on the internet which helped with the model. The airplane is painted in Light Compass Ghost Gray and Dark Compass Ghost Gray. When painted, I did not see much difference between the colors but when I checked photos of the real aircraft, it didn’t show much contrast either. At the rear, the instructions call for Flat Gun Metal and Metallic Flat Steel for the colors of the tailpipes and the rear of the fuselage. I used Testers metallizer paints and in retrospect, I probably should have used darker colors like burnt metal. I expect that the Italeri acrylic paints would have been more accurate.

Next came decal application. The main tail marking looked beautiful and correct but I found it to be very thick and it did not settle into the rudder details even with lots of Solvaset. If I were making this model again, I would have deepened the rudder grooves and maybe even slit the decal. Another problem with the national marking decals was that the red printing was not perfectly lined up with the white base of the decal. As a result, you can see some white edges showing with the insignia. I will probably try to cover this with paint at a later date. I did not trim it off before applying the decals because I didn’t notice it. The major problem that I encountered however was with the smaller decal call-outs. I started applying decals on the undersurface first. The instructions call for two examples of decal 2 to be applied in front of the dive brakes. I found two red triangles on the sheet and applied them to the underside although the drawing did not show any orientation. Later, when I was applying decals to the side of the fuselage, the instructions called for decal 2 to be applied under the cockpit. It was the ejection seat warning. I had to use a decal from my scrap sheet for this application. Other problems were decals 19 and 20. One set was applied close to the wing root, as shown on the instructions but the other set should be applied at the wing tip, not at the mid-point as suggested by the instructions. Several other problems were encountered with either the decals or the instructions. The modeler should check drawings well before starting to apply the decals. I suspect that the base decal sheet has been used with many versions of this kit and extra decals were included.

One notable feature of the F-5 is a set of auxiliary air intakes that are located on the rear side of the fuselage. These are shown on the box cover drawing. A very fine line seems to show their location on the model but that disappears with paint application. I would suggest that Italeri include decals that can be used to denote this feature if the modeler prefers.

As I mentioned at the start, the molds to this kit are very old. I would love to see a new, modern set of tooling for this kit. In any case, this is an easy kit to build and results in a good looking model. I would easily recommend this for modelers of all experience levels, particularly for new modelers. It has about 50 parts and the assembly is easy. Many great schemes exist for this aircraft so it can fit into many collections. After all of my comments, I believe that I will add another F-5E to my collection. I have a Tiger Meet kit in my stash and now, I know what to do and what not to do with this kit. My thanks to Hobbico for providing this interesting color scheme and to IPMS for letting me have this build.