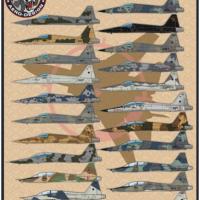 The movie Top Gun, love it or hate it, raised a lot of interest in the Navy Fighter Weapons School, and that interest was not lost on modelers with the markings of the Adversary planes standing out. Furball has given us an enormous sheet of markings covering twenty-two different schemes covering both the F-5E, F-5F and the T-38A between 1976 and 1986. There are options for twelve F-5Es, four F-5Fs, and six T-38s. As noted in the header, there are separate sheets for the 1/48th and 1/72nd scale planes and both cover the same subject. AND, there are complete markings for all 22 planes!

Here’s a complete rundown of the aircraft that are included in this set:

The 1:48 product web page can be found at this address:

and the 1:72 product web page can be found at this address:

Inside the packet you will find one large sheet of decals printed by Cartograf, which are aligned perfectly. The instructions are full color, and include eleven color side and a cover for the decals. The markings range from simple overall light gray to multiple colors to splinter schemes to SEA camouflage colors. And speaking of Top Gun, the supposed Mig-28 scheme is also included which is the all black one in the attached pictures. Sure, its fictional, but it was even researched.

Where needed, there are notes in the instructions dealing with plane specifics and notes to help the modeler.

With great color schemes to meet everyone’s preference, full decals for twenty-two planes and Cartograf quality, this sheet is a bargain. It’s less than $1 per plane. Wow!

High, highly recommended. My thanks to Geoff and Furball for the opportunity to this awesome set.