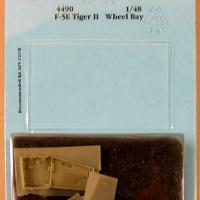 Aires has been on the scene for some time now, producing some amazing details in resin and photo etch metal. Among aftermarket aficionados, Aires is the top of the pack for the level of detail and quality of casting. This set for the AFV Club 1/48 series of F-5 Tiger II kits is no exception, though installation is quite another matter.

The blister pack comes with four resin parts – two main gear wells, one nose gear well, and the actuating rod for the nose gear. The parts are finely cast in grey resin with no blemishes or flaws. The detail is great, and very fine. A quick comparison to the kit shows there is marked improvement over the kit details, both in finesse and accuracy. Also, the overall depth of the main gear wells is improved with this set, getting it a bit closer to actual depths. The kit uses the thickness of the plastic in the wing to set the depth, especially with the outboard portion of the well that holds the leg, while this set accurately portrays the depth.

Installation: a test of nerve and patience

Before you begin, gather the necessary items you will need to perform major surgery on your kit. Along with the usual knife, files, and sanding implement, you will also need a Dremel tool with at least two different cutting heads. I used both a cylindrical one and the teardrop-shaped one. Now, build up enough nerve, because once you begin there is no turning back!

I started by grinding out all of the kit landing gear bays. I started with the teardrop-shaped head, on the tools lowest speed, to punch through the kit. I then switched to the cylindrical head and ground out the bays up to the edge of the bay door openings. Once this is complete, flip the part over so you are now looking at the inside. Now using the Dremel at a 90 degree angle to the plastic, SLOWLY grind away a shelf around all the openings. Take your time, and brace your hands, doing only a little at a time. Once you have a shelf carved out, test fit the resin parts, grinding offending areas of plastic until you get a decent fit. Files and sandpaper cleaned up the job. Since I had the Air Brake set also, I repeated the process for those areas as well. You will also need to remove some plastic from the inside of the top wing halves. The wing is pretty thick, but again using the cylindrical head at a 90 degree angle, slowly carve away as much plastic as possible. Keep test-fitting and carving until you can sandwich the new resin bays into the wings. Now, granted, what I just said in a thirty-second paragraph took about two hours to accomplish, so prepare yourself!

After removing as much of the resin pour plug as possible, and much test fitting, I finally was able to get the new wells to fit. However, the fit wasn’t perfect in the end, and now will require some strip plastic to fill in small gaps and cracks around the joint between the resin and plastic.

For the parts themselves, they are beautiful and are more detailed than what is offered in the kit. However, one has to decide if it is worth it in the end to spend two to three hours installing these, plus the risk of damaging the base kit, for some minor additional detail that may be best added with wire and scrap plastic. Personally, I will probably never use these again, as the kit’s bays are more than adequate and, out of the box, the entire base kit could be assembled in the same amount of time it takes to install these wells. So, the choice is yours. If you must have the additional detail and accuracy, then they are recommended. However, if you are looking for a quick improvement, then you may want to pass on these and focus on other more visible areas of the kit for aftermarket improvements. Thanks to Aires for the sample and IPMS/USA for the opportunity to review it!

Wheel wells deepened in both halves of wings