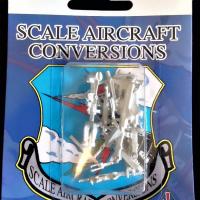 Scale Aircraft Conversions has been providing replacement gear for a wide range of aircraft models for some time now, and the quality of their products is, by now, unquestioned. This new product for the Kitty Hawk Range of F-5E Tiger II models in 1/32nd scale is no exception.

Comprised of ten pieces in cleanly-molded white metal, this kit is designed to directly replace most of the major components of all three landing gear, including hydraulic rams and oleo scissors. Examining the pieces next to the kit-provided gear, they appear to be exacting replicas of the originals, although some of the finicky assembly work of the plastic items has already been done for you, as well as the filling in of a few rather awkward pin marks.

I compared what I had with what is listed in their web site, and they’ve made some changes to the selected items, replacing some of the hydraulics with smaller parts that might be more likely to break during plastic assembly – a reasonable decision on their part, I feel. They also made a minor change by casting the entire front leg as a single piece. All you have to do is bend one arm slightly to slide the front wheel into position.

Certainly sturdier than their plastic counterparts, these pieces will mount directly to any version of the Kitty Hawk Tiger II with no modification to the kit whatsoever. They simplify assembly quite a bit and are literally indistinguishable from the kit items. They also add a nice heft to the model and to me, at least, make the model feel a bit more stable.

These are a nice addition to Scale Aircraft Conversions’ stable of landing gear. I like how they simplify this complex assembly while providing some additional durability to the final model. I can recommend them without qualification.

As always, my heartfelt thanks to IPMS/USA for giving me a chance to add these to my latest build, and to Scale Aircraft Conversions for creating them.