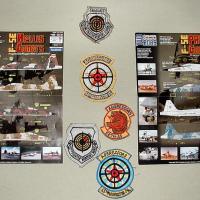 The Northrop F-5E found a home with both the USAF and USN as a dissimilar air combat training aircraft, more commonly known as an Aggressor or Top Gun Adversary aircraft. A former brother-in-law of mine was kind enough to invite me to Nellis AFB in the late 1980’s as he was going through his Aggressor pilot training before being posted to Bentwaters, UK. Getting a chance to see a group of “cheap” F-5E’s “shoot down” a flight of F-15’s was quite an impressive achievement, but then that was the purpose of these highly trained adversary pilots, to teach tactics used by Eastern Bloc pilots and their satellite air forces. I previously was a big fan of the uniquely painted aircraft and getting to see them in person and watch them in action just solidified my interest in them. (Yes, I know that the 527th patch is USAFE based, but I didn’t have a 26th AS patch in my collection).

For many years, the only reasonable 1/48th scale model available of the F-5E was the venerable Monogram kit. There were a few USAF Aggressor decal sheets available, but they were limited. Two Bobs has previously addressed the F-5E in USN livery quite well, but not until the recent release of the new AFV F-5E, did they do the same (or better) for the USAF counterpart. Since that kit release, TwoBobs has been kind enough to cover not only a couple of the very interesting Aggressors paint schemes/markings, but almost every color variant flown by the US and PACAF based Aggressor squadrons (and most recently, the USAFE Aggressors that were stationed at Alconbury, UK).

Included in this review are two sets of each from the Nellis and PACAF aircraft. There are 2 additional sheets available for Nellis aircraft (and more recently four additional sheets covering the USAFE Aggressors that were Alconbury based) that capture the remaining Aggressor paint schemes. As usual, the color instructions are all that is needed to get the saliva flowing over these great color schemes (sorry, but I’m not a big fan of gray-on-gray aircraft schemes). The instructions capture each aircraft from all sides. Usually you’ll get a split top/bottom view and one side profile, often leaving you to guess exactly how the unseen portions of a multi-color camouflage job come together. Not with these sets! The coverage of the schemes is complete as are the references to the required FS color numbers. Also, and very importantly, TwoBobs has provided enough decals on each sheet to be able to do ALL of the aircraft that are defined on that sheet! Usually you get enough stenciling and national insignias for one or two aircraft out of five options, so this is a very neat addition. If you’re only planning on building one or two of the aircraft from one or more decal sheets, you can still supply friends or club members with the remaining options and not force them to scrounge through their decal dungeon to come up with the proper size stars-n-bars!

The first Nellis based sheet (48-213) covers the following schemes: Frog, Snake, Flogger, New Lizard, and VNAF. This sheet has two of my favorites, those being the Frog and Flogger, both having a cool mix of contrasting colors that will make a scheme that stands out nicely.

The second of the Nellis sheets (48-214) again supplies five different schemes, though these are some of the more subdued, yet still very cool, schemes: New Ghost, Old Ghost, Silver, ADC Gray, and a second Silver.

And finally the second PACAF sheet adds a bit more flare to one of the five aircraft by including a scheme with a “shark’s mouth”: Silver, VNAF (with the mouth), Snake, another Silver and another Old Ghost.

As usual, the decals look to be very thin and in excellent register, being printed by Microscale. Having used Two Bobs decals in the past, I can highly recommend them for ease of application and a remarkable ability to contour to irregular surfaces with just a little Micro-Sol.

An excellent reference for all of these schemes and specific F-5E details is Detail & Scale Color and Markings volume 11 “USAF Aggressor Squadrons”. Lots of color and B&W photos as well as copies of the official USAF T.O. for each scheme and an in-depth text history of the entire Aggressor program, will be a great addition to the decal sheets reviewed above.

In conclusion, I would like to personally thank Bob Sanchez and TwoBobs not only for supplying these great decal samples, but for filling a major void (IMHO) in coverage for these unique aircraft. While I know I’ll never build enough F-5E’s to get all of the cool schemes onto my display shelf, I can no longer use the excuse that, “There aren’t any decals for that one. That’s why I haven’t built it!!" Thanks again to TwoBobs and IPMS USA for supplying these remarkable samples!