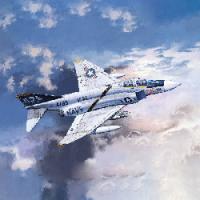 The McDonnell Douglas F-4 Phantom II is an all-weather, long-range supersonic jet interceptor aircraft/fighter-bomber originally developed for the United States Navy by McDonnell Douglas Aircraft. It was also adopted by the U.S. Marine Corps and the U.S. Air Force. The Phantom is a large fighter with a top speed of over Mach 2.2. It featured a tandem two-seat with twin-engines. It can carry more than 18,000 pounds (8,400 kg) of weapons, including air-to-air missiles, air-to-ground missiles, and various bombs. The F-4 was designed without an internal cannon, but later models incorporated an M61 Vulcan rotary cannon. Beginning in 1959, it set 15 world records for in-flight performance, including an absolute speed record, and an absolute altitude record.

The F-4J aircraft featured a much-improved radar and avionics, as well as improved aerodynamic design. In addition, it had an improved J-79 engine with a longer afterburner nozzles. Gone from, was the infrared seeker located under the nose that was a mainstay of the F-4B/C/D versions. Although it did not carry a gun, the aircraft performed well as an interceptor with its Sparrow and Sidewinder missiles. The Navy's only Vietnam aces flew the F-4J for all of their five kills, one pilot and one radar intercept officer (RIO). The Phantom has the distinction of being the last U.S. fighter flown to attain ace status in the 20th century. Phantom production ran from 1958 to 1981, with a total of 5,195 built, making it the most numerous American supersonic military aircraft.

My sample arrived in a large sturdy box featuring artwork of the Phantom in the guise of VF-84's Jolly Rogers flying over a cloudy sky. Inside I found several neatly packaged large multi-colored sprues, the instructions, a large double sided color plate for painting and decals and a large decal sheet printed by Cartograf. The sprue comes in white, gray, black, black metallic and clear. They are near flawless, flash free and exhibit fine engraved panel lines and rivet details. The instruction is clearly printed on a large fold out sheet in B&W and are easy to understand. The large color plate comes on a double side fold out with the side views on one side and the top and bottom views on the other. The decals are extremely nice and offer two options from VF-84 circa 1972. In addition to the accurate reproduction of J-Type that served during Vietnam War there are various armaments of air-to-air and air-to-ground combat plus three lifelike pilot figures are also included.

I began this build with the cockpit as planned out in the instructions, it is relatively simple and was easy to assemble. The nose landing gear bay is incorporated to the bottom side of the cockpit floor and then this sub-component is added to the lower forward section of the fuselage. The cockpit has its strong points, the instrument panels are really sharp and the sidewall panels aren’t bad either but the rest is pretty basic. The Martin Baker ejection seats are followed up several steps later in the instructions, and even though they build up with 8 tricky parts, each, they still leave a lot to be desired.

The main landing gear and gear bays were built up next, this consisted of framing up the sidewall structure boxes and adding the gear legs. I used the bottom wing as a jig to ensure the correct angle position. As a personal building practice, I did not add the gear legs at this point. Happy so far I glued the main gear bay framework into place and added the speed brake wells. Before closing up the wing assembly several holes need to be opened in the bottom wing halve and a few more in the top wing halves. Next up was the burner cans and intakes.

First thing I noticed with the burner cans are the turkey feathers and exhaust tubes are not molded in halves, making them seamless. They are pretty decent and build up in 3 parts each and are comparable to some of the aftermarket ones I’ve seen over the years. The intakes however are a different story and quickly fall out of favor, the design concept is commendable but not satisfactory. The design relies on forced perspective to hide the mating seams when viewing the finished model, but it didn’t work as hoped for, that said it’s still better than the Hasegawa design IMHO. These items were easily completed and then added to the wing assembly along with the lower forward nose section.

The main fuselage section comes as a one piece unit and fits nicely atop the main wing/lower nose assembly. The upper fuselage requires plugs to fill the optional cut-outs, the USAF style refueling point is different than that of the Navy. After the USAF point is plugged off it needs to be blended in and made to disappear. The Navy’s version is an extendable arm probe, the kit offers the option to pose the probe extended or closed, I opted for the extended position, it builds up in 5 pieces and is nicely detailed. However this insert plug requires some filling too.

The forward intake and variable ramp was easy enough, but you’ll need to fill in a few pesky pin marks and the fit is not all that great when mating them to the fuselage/wing assembly. This also requires filling and blending. The radome went on next and the fit is pretty good, but it’s a little tricky to keep centered. I continued on by adding the nose scoops, cockpit combing panel and the center canopy roll over bow before moving onto the aft section.

The aft empennage section is cleverly designed and builds up easily with only 4 parts including the one piece tail hook. Sadly I must say the tail hook was very disappointing and is one of the weakest points in terms of detail I encountered on this kit. Moving on, the vertical fin with cap and the fuel dump mast were then added to the aft end. The elevators were left off and added later, after painting. The outboard wing sections and ailerons were attached next, all these items fit well and lined up properly.

Then what seemed to be an endless supply of smaller items went to the bottom side that included the landing gear and related parts. Finally after painting, I applied the decals with great satisfaction, they went down without a fight and despite the large size of some they were very manageable. I then added the elevators, drop tanks, hard point pylons, missiles and posed the canopies opened completing the build.

It’s a great kit overall and I highly recommend it. Thanks to Academy, MRC and IPMS for the opportunity to present this fine model.