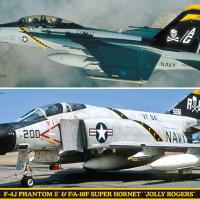 Represented in this 2-kit set are 2 legendary aircraft originally conceived by McDonnel Douglas -- the F-4J Phantom II and the F/A-18F Super Hornet. The F-4J was the Navy’s primary fighter-bomber during the Vietnam and into the mid-1970’s until replaced by the Grumman F-14 Tomcat. Ironically, the F-14’s replacement was the F/A-18 Super Hornet, which has seen ongoing operations in the Global War on Terror.

Hasegawa puts forth a couple of beautiful offerings spanning nearly 3 decades of release history. The F-4J is a repop from its late 1980’s F-4 series, which was and remains a benchmark by which other 1/72 scale F-4 kits are measured. The F/A-18F kit is also a repop of tooling originally released several years ago, and also stands as a standard by which other 1/72 scale F/A-18 kits are measured.

Both are molded in light gray and have finely recessed panel lines and raised detail. Scaling and dimensions of both kits are consistent with reference drawings and photographs. Cockpit detail is adequate for a 1/72 kit, featuring color decal instrument panels and side consoles. Seat detail on the F-4 is good for this scale, however the F-18 set detail is not quite as robust as that of the F-4. Canopies and other clear parts are crisp and crystal clear. Wheel well and landing gear detail is also crisp and well-executed. The F-4J does not include any ordnance, but the F/A-18 has a compliment of AIM-120 AMRAAM and AIM-9X air-to-air missiles. The only truly regrettable element missing in both kits is the engine faces and intake tubes. Decals are beautifully printed and in register. Markings are provided for one aircraft of each type.

This 2-kit bundle presented a great opportunity to do a buddy-build with my son, Camden (11). Being a junior “Phantom Phanatic,” Camden naturally chose the F-4J, leaving me with the F-18.

Having built a few of the Hasegawa Phantoms already, I was curious to see how a young (but fairly experienced) modeler approached the build. For the most part, Camden chose to follow the assembly sequence to get the basic airframe put together, leaving off canopies, stabilators, exhausts, and landing gear until final post-finishing assembly. Assembly went as expected – no major obstacles or “gotchas,” although he did need to use a fair amount of putty on centerline of the main fuselage subassembly. Having built the RF-4C variant in the past year or so, I can say that with the proper amount of patience and finesse, minimal putty is needed for that seam. A little putty was also needed along the intake/fuselage interface, which was consistent with my experience with the series.

Once the basic airframe was assembled, Camden masked it and then primed with the Walmart house-brand gray primer to highlight surface flaws and provide tooth for the acrylic paints. Once the surface flaws were corrected to his liking, he spot-primed those areas and then sprayed the belly, flaps, and stabs with Tamiya Fine White Primer and airbrushed Model Master Acryl Flat Gull Gray on the upper surfaces. Once cured, he masked around the radome, vertical stabilizer, and natural metal areas, and then applied Alclad II gloss black primer to the exposed areas. Once that was cured, he masked the vertical stabilizer and applied Vallejo Metal Color shades to fuselage jet exhaust panels and the inboard sections of the stabilators. Following demask, a coat of Krylon Acrylic Gloss was applied from a rattle can. Time for decals.

The kit decals went on extremely well using the Microscale System. They were thin, easy to handle, and settled down into detail readily. The only difficult decals were the ones for the vertical stab cap. It took a bit of coaxing and scoring with a hobby knife and repeated application of Microsol to get them to settle down, but still not to his liking, so it was painted yellow. Once all of the decals were debugged, a flat coat was applied to the upper surfaces, and a gloss was applied to the white areas. Final assembly was wrapped up with a couple minor points of resistance. The nose gear uplock mechanism was too wide to fit into the wheel well, and required some trimming to fit, and the arch between the forward and aft canopies was warped, and presented a struggle to get both sides to mate flush with the fuselage sides.

Assembly of the “Super Bug” was clean and without any significant issues. A few spots of putty were needed along upper and lower fuselage seam between wing trailing edges and stabilator leading edges, along upper and lower seams of the forward fuselage forward of cockpit and nose wheel well, and along the seams on the underside of the wing/fuselage chines. Vertical stabilizer fit is nicely engineered, facilitating a perfect fit and off-aircraft painting of the stabs prior to final assembly. Hasegawa also makes nice use of polycaps for securing the stabilators, and making off-aircraft painting and prep of the stabs more modeler-friendly.

The F-18 was lightly primed with Walmart house-brand gray primer to highlight surface flaws for correction, then was given an overall light coat of Walmart house-brand flat black spray paint to serve as a preshade. Vallejo Model Air FS36320 and FS36375 were used for the Ghost Gray color scheme, and Alclad II primer was used as the gloss black for the vertical stabilizers and the black accent area around the canopy. Krylon Clear Gloss Acrylic was applied from the rattle can to provide a thin glossy base for decal application.

Decals for the Bug shared the same sheet as those for the Phantom, and laid down beautifully with the Microscale System on the clear gloss finish. A flat coat was applied to gray areas, and a semigloss clear coat was applied to black sections of the aircraft. Once the final clear coats dried, final assembly was completed, resulting a sharp-looking Jolly Rogers F/A-18F.

From a technical perspective, both kits are well-engineered and suitable for intermediate to advanced skill-level modelers. Fun builds with minimal fuss and absent of frustration. From a US Naval Aviation fan perspective, the markings are a huge hit – making it easy for modelers to build subjects separated by decades of operational use, but bound together by unit livery and legacy. In summary, we highly recommend this dual-kit offering from Hasegawa!

Thanks to Hobbico for providing the review samples and to IPMS/USA for the opportunity to build them and share our observations and opinions of the kits and the builds with you.