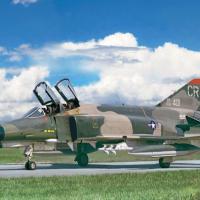 5068 McDonnel Douglas F-4 Phantom II aircraft were built during its production run in the United States, with another 127 aircraft being built by Mitsubishi in Japan. This famous aircraft served with the United States Air Force (USAF), Navy, and Marine Corps, and in many allied countries over a thirty-year span. Later on, a group of retired USAF aircraft would go out in blazes of glory as they were used as full-scale aerial targets for missiles.

Italeri’s 1/48 scale F-4E is a faithful reproduction of the real thing and can be built into a nice showpiece. The model uses recessed panel lines, with the flight controls being a bit deeper than the panel lines. However, one problem that this model suffers from is the mold being designed to represent multiple variants of F-4s. There are extra parts for an RF-4 nose, and the cockpit suffers from simplicity, with the detail consisting of decals superimposed upon semi-accurate dial faces.

Where the real problems lie is in the fuselage and the intakes. The fuselage has a mismatched area where it would appear that the mold sections are swapped depending on the variant being produced. The intakes suffer from numerous – and quite visible – ejector pin marks on the inside of the intake faces that require filler putty and sanding in order to smooth these out. These ejector pin marks are visible from the outside of the intakes.

My sample had warped wings, but careful gluing and positioning cured that problem. This kit is not alone in this problem, as any single kit in any given production run can have warped wings.

A nice detail that Italeri added is the two different gun muzzles used on the F-4E. Check the aircraft you are modeling in order to use the correct gun muzzle. The kit also comes with dual pitot probes on the vertical stabilizer, which again is a detail that depends on which particular jet you are modeling. The aircraft I modeled had a single pitot probe on the vertical stabilizer, about halfway up the leading edge. I removed the kit pitot probes and replaced them with a single one made from stock styrene.

Most of the seams cleaned up with sanding and a bit of putty – however, notable exceptions are the fuselage mold mismatch at the center of the fuselage, and where the intakes meet the fuselage. Both required several layers of putty and sanding to get the seam presentable.

The nose can be another major problem area, but if you tape the two halves of the nose together, and then tape the assembly to the model, the nose will be in almost perfect alignment and ready to glue onto the body. I assembled the nose separate from the fuselage and had no problems using this technique.

The kit decals are wonderful and quite numerous, as there are markings provided for four aircraft, with the USAF, Japanese Air Self Defense Force, Israeli Air Force, and Australian Air Force being represented. Numerous stenciling decals will keep you busy for several days just applying these alone, but the final outcome is a look of realism that is hard to top. All of the kit decals took decal setting solution nicely.

The particular F-4E that I chose to represent with this kit is an NF-4E, serial number 66-0329. This aircraft has an interesting history – it was built for the USAF “Thunderbirds” demonstration team, and when the team switched to T-38s, their old F-4s became test and chase aircraft at Edwards Air Force Base. What is unusual about the Thunderbird aircraft is that they have no radar installed, and (too late for the build!) they also have no guns, the muzzle piece being solid with no hole for the gun! This aircraft is now on display at the Pima Air Museum in Tucson, Arizona, repainted in Thunderbird colors.

Overall, this kit builds into a nice representation of the popular F-4 aircraft and is one that I would recommend. My thanks go out to Italeri and to the IPMS USA for providing my review sample.

Top of Phantom
Previous Next