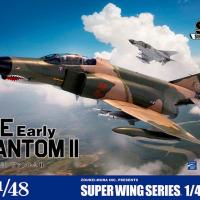 Zoukei-Mura started there 1/48th scale F-4 Phantom series with the F-4J in 2016 and since then they have issued an F-4S, F-4C, F-4D, F-4J Marines, another F-4J and this latest release, an F-4E Early…we finally have a gunned version and it is magnificent.

Let’s look in the box (and it is packed). There are well over 400 part in the box with lots of options and parts not in use. These are on 14 perfect gray sprues with one clear sprue included for canopy parts, etc. There is one set of marking included for F-4E-35-MC, 67-0308, 469 TFS/388 TFW, Ubon RTAFB, 'Betty Lou' which has two full color sheets. Most of these is taken up with the 400 stencils that go onto the plane- more on that when we get to it. There are a lot of optional position items to chose from when you build also including:

There is a goodly set of air to air weapons plus others included:

The inclusion of the MER/TER does not include bombs so you will need to source some if you go that way. Again, more on that later. And certainly not last, there is a set of instructions that are perfect. They are well thought out and include notes for the build which are helpful. In this case, follow the instructions.

Construction is similar to the previous version so I will hit the highlights and differences. The cockpit is first. I did elect to use Wolfpack seats but only because they have the seatbelts which are not in the kit. Everything else in the cockpit is there- separate throttle handles, decals for the instruments and excellent painting instructions. Once done, the fuselage is sealed up and the top insert is added. This is about the only place during the entire build any filler was used and it was a small dab or Perfect Plastic Putty which was wiped with a wet tooth pick and done. The engines were built next and all the holes opened for the pylons. The wheel wells were added and then the top wings and then the fuselage was mated to the wings with a perfect fit if you take time to aling the aft engine area. The front intakes were built and added and did require a touch of putty too. The flaps and slats were added and I prepped things like the landing gear doors and pylons. I did decided on a configuration of Fuel tank, TER, Center Fuel Tank, TER, MER all full of bombs based on a configuration on a reference site. After just a couple weeks, we were ready for paint. The scheme is a three tome green/tan over camouflage grey so time was taken to mask and paint the scheme. Once done, the metallic engine area/tail hook and tails were painted four colors. Lots of tape and time but worth it. This took another couple weeks and tings were gloss coated and dried.

And then there were decals- hundreds of tiny stencils just like the real thing. My method doing these was to work in areas and do a bit at a time allowing for drying time. The great news for this- Cartograf decals which were perfect. So I added decals and added decals and then added more decals. I kept the sheet in front of me and as I added the decals, I marked them off. You could see the plane come to life and after almost two weeks, I was doing a couple touch ups and was ready for a wash- Florys black to bring out the wonderful panel lines. After checking, several flat coats was added to dull the plane and protect the decals.

While this was going on, I was working on the pylons. I needed 12 mk. 82 bombs so I got them from the AMK F-14D set. The pylons are very accurate and are many parts with the tiny bomb shackles so alignment takes time. Once every was decaled and I added the bombs, they were very fragile. I added some bombs back multiple times. I also built and painted the two drop tanks I needed.

What was left was to add all the parts onto the plane. I started on the bottom center adding the air vent doors, the center tank and work my way out to the speed brakes, TER”s, landing gear doors and then the outer pylons with the fuel tanks and MER. The front landing gear doors were added. BTW, the very front door with the landing light is a thing of beauty! A little flat coat was shot in certain areas to hide some glue marks.

I flipped the plane over (carefully) and added the canopy parts and ejections seat. A bit of advice- add the seats first like the instructions say- I went the other way and it was much more interesting and not in a good way. I got a little too excited by the canopy fitting so well. I did have one issue- the strut holding the forward canopy broke as I cut it from the sprue. Also, don’t forget to add the mirrors to both canopies.

This is a fantastic kit full of great fit, superb decals and many options and for $75, it is a huge bargain also. I could have spent at least another couple months working on this if I wanted to enter it into competition- I can’t find any issues with the kit. On a last note, some the experten out there had some issues with some of the earlier versions being a little out fo shape near the engines. This was fixed for those that care but this does show the level which Zoukei Mura cares about their customers. For my choice, these are the best Phantoms in any scale and as I said, a huge bargain to boot.

My sincere thanks to Zoukei-Mura for allowing IPMS to review this kit and taking the time an effort to produce it.