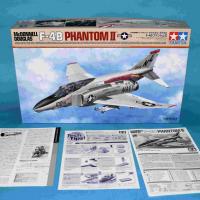 To start part 2, I started with the unique horizontal stabilizers. These are molded in a single piece (check out part one for a picture. This slots into the bottom of the fuselage with a rubber grommet and the two moving parts are actually separate allowing the entire thing to be posed. The fit is so good; I assembled the parts and left them off until later to ease painting.

I assembled the tail next and it consists of four parts. Since I was doing the VF-111 plane and its tail was white, I was worried about masking it off; no need to , the fit is so good, it also can be added later making painting easier. I did add the outer wing panels at this time and did have to do a little bit of filling with Perfect Plastic Putty.

Before painting (I like to go bottom first), I prepped all of the bottom white parts including fuel tanks and pylons, landing gear doors, pylons and other miscellaneous parts. I then used Model Master Insignia white on everything and slowly got a nice clean coat. Outer panels of the tail were included in this also.

Since this was going to take a bit to dry, I built the missiles- four AIM-7E Sparrows and four AIM-9G/H Sidewinders. These are the same as the F-14A kit in construction and are fully decaled also. Next, I jumped to the exhausts. I had checked the4 base earlier and to no surprise, they fit well enough to add later. Each exhaust consists of seven parts and the fit is tight and they come out looking good.

Back to the plane, I masked the white and shot gloss black for the metal areas. I like to use Tamiya Gloss Black thinned with lacquer thinner. It is glossy and dries quickly. I sued 4 shades or Alclad including magnesium, jet exhaust, aluminum and pale burnt metal. I also masked and painted the horizontal stabs too. Lots of Tamiya tape was used!

At this time, I added the windscreen and canopy and it fit well. The kit comes with Tamiya’s uncut masks. Also, the inside of the canopy has separate rails and parts which were painted black and added. One the canopy was added, I pre-shaded with black and then masked again and shot the entire plane with Xtracolor Light Gull Gray. This was set aside to dry overnight and I finished off the seats. They are very good and build up from nine parts each. Tamiya includes decals for the seats. I used an extra Quinta set from and F-14. The pull rings are the same and look great and while the seat belts are not accurate, they look better than the decals and are a close enough for me.

One dry, it was decal time. Decals are typical for Tamiya. A little thick but go on well. Doing the Sundowners meant a couple very large tail decals. I can say they went on well, settled using the Microsol system and thee were no issues. Also, because of the version I chose, there were a lot less decals. I can say they they have different decals for folded wings versus extended so you do not have to worry about cutting which is great. Once dry, I started final assembly.

I added the horizontal stabs. They stabs go in first, then the bottom and you add the two top side plates and everything fit perfectly. Not good mind you- perfectly with no seam at all. The tail was added and the same, slide into place, no seams. Same with the pylons. The only thing I had to monkey with was the fuel tanks. I holes seemed a little small and I had to ream them out a bit but no big issues. I flat coated the kit and removed the masks and done!

I’ll say it again, this a marvel of engineering and fit. Each sprue gate, ejector pin and parts breakdown was thought through from the view of modeler to make it easy. Best kit ever and that is saying a lot from Tamiya.

My total gratitude to Tamiya for not only making and letting IPMS/USA review this kit but to their efforts in making so much fun to build.

Wing Tank and Sidewinders
Previous Next