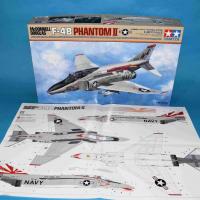 When Tamiya announced they were entering the Phantom market in 1/48 scale, the Internet buzzed. And now the kit is out, a 1/48th scale F-4B Phantom. Let’s start by taking a looking the box. For starters, there are 14 sprues of perfect Tamiya grey and clear plastic. There is also a set of instructions, a set of Tamiya Tech tips and a background information booklet about the plane. There are two large double-sided four-color pages with markings for the three planes and a drawing for stencil locations. Also included is a set of masks (not precut). Lastly, there are two decals sheets with markings for the weapons, planes and stencils.

Markings are included for the following:

Options included for the modeler to use are:

A note about the engineering before we dive in - it is flawless. One of the things about Phantoms is angles. The outer wing panels, the exhausts and even the canopies all have specific angles. In most kits, this is left to the modeler to make sure they are correct - Tamiya fixed all of that. First, if you select canopy open or wings tips folded, they have molded a set of parts to make sure the angles are correct. All you need to do is select the correct parts. You want the wing tips extended - different set of parts but the angle is molded-in correctly. Also, the one-piece horizontal stabilizer right and left sides move in concert. No more misalignment issues with two separate sides. And as a preview, if you loved the way their Tomcat fit, this is even better.

One other note, this is the only the first of Tamiya Phantoms - many of the parts are modular. The tail for example has separate leading edges. The seat cushions for the ejections seats already have several options. Even the extra decals sheets list parts for a “J” version so that is good news.

Construction starts with the cockpit. I followed the color call-outs and painted as I went. There are some decals to add and they are clearly called out. Everything fit and assembly is straightforward. Note that there are some differences between options A/C (USS Coral Sea and USS Midway) and options B, the NAS Miramar plane. At this point, I went with the Sundowners, options B. The front gear bay was assembled and added to the cockpit. The instrument panel was built and added here as it gets trapped in the fuselage. I added a wash and light chipping, but I want a fairly pristine build this time.

Before closing up the fuselage, you need to install rear engine parts. The fit is so good on the aft engine parts I did not need filling or sanding. With this done, the cockpit and engines were added and the fuselage closed up. The top of the fuselage is a separate part (also showing more versions to come) and fits well.

The wings were next and start with a main spar. This also holds wheel well parts, and the visible engine sections for the air bleeds. About a dozen parts are added and then the spar to the bottom wing and the top wings added to close things up. Pre-painting the interior wheel wells white is also a good idea. The wings were added to the fuselage and they fit perfectly. No seam, nothing, they literally clicked into place, I ran a couple beads of glue into place and done. I attached the nose undersurface next without issue.

While I was at it, I built the two flaperons for the wings. Another piece of innovation was here - the traditional droop and models have been making jigs and the like to get them correct. Tamiya has molded the tabs at the correct angle. You need to choose up or drooped, us the correct part and voila - dropped flaperons and the correct angle.

Lastly, the same thing applies to the outer wing panels. I want folded so I used parts B13 and B14. You want extended, use parts B11 and B12. All molded to the correct angle you need for your choice.

That is it for Part One. I am overwhelmed with the intelligence and engineering behind this kit. Also, the B Phantom has LOTS of cool markings. I will be back shortly with the finish.

My total gratitude to Tamiya for not only making and letting IPMS/USA review this kit but to their efforts in making it so much fun to build.