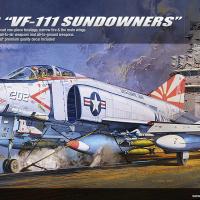 Academy's first release in a new series of 1/48 scale Phantoms is an F-4B in VF-111 "Sundowners" markings. There are 15 spectacular sprue with one being clear. The rest are colored to the specific areas of the plane. the bottom parts are white, the top gray and metallic parts black. Panels lines are fine and there are some real innovations. For example, the engine exhausts are molded as a complete tube so there are no seams to fill and they look great. There is also a complete set of weapons with the needed bombs and missiles and a full set of drop tanks.

Construction starts in the cockpit. The kits parts are very nice but I did use the Eduard PE set for the cockpit. One nice feature of the kit is that the cockpit side instrument panels are separate and can be painted separately and can be glued on after painting and detailing. At the same time that the cockpit is being built, the wheel wells are built. The front well has the linkage in it fort eh gear doors and this was tough as this is almost the first thing added. I broke it off two steps later as it is very fragile. This cockpit/front well assembly is glued in front bottom of the fuselage.

The two main gear wells are built and the gear legs built into them. Don't try to add these later as it won't fit well. These are then glued into the wing bottom. The kit shows that the exhausts are added now but they can be added later. The intake trunks are built at this time. The intakes are complicated and I decided to add the excellent Steel Beach FOD covers to hurry the build. The instructions show the seats built at this time but I elected to use Wolfpack seats- my choice not that the kit seats are bad, i just had a set laying around.

The top of the fuselage is next. This is a beautiful one piece molding. There is also a refueling probe that needs addressed. I elected to close mine. The top is the added to the bottom. . Fit is good but take your time and get the parts matched up. My front area need spread a little to get a superior fit. The intakes were added. The back of the fuselage is multiple parts. Again, take your time. Since this is the metallic part of the a Phantom, you can also leave this off and paint it separately and add later. I also added the nose at this point. While others may have had problems, mine virtually dropped on with glue one small touch of putty.

The tail can be added. One note- there are lot of interchangeable parts and more versions are coming and the F-4C/D is already out. The wing tips are added. Make sure the angles are good. the front landing gear is also added. because there are lots of parts to be added, I set up a box to start collecting parts like landing ear doors, wheels, antennae that need painted but won't be added until later.

I decided to use Superscale VF-32 Swordsmen decals from Squadron. This set of markings has a simple paint scheme which is white bottom/gull gray top and dark gull gray tail. the kit was painted with Xtracolor enamels for a bright glossy finish. The Superscale decals were terrific and went right on with no issues. One thing about Phantoms is the stencils and the kit markings are used for them. There are hundreds of them. it took three separate sessions to get them down and another day to make sure they were settled. They are very nice and really enhance the model. Once done, they are clear coated and set aside.

While the airframe is drying, I built the weapons. There is a separate sheet for four load outs of weapons. I chose number two which was two fuel tanks on the outboard pylons, two sidewinders on each inner pylon, and a centerline pylon with a MER and six Mk. 82 bombs. There were built with no problems and there is a full set of stencils for all of the weapons and pylons.

During this time, I masked and painted the canopy, the wheels, antennae and many, many little parts. All that needed to be done was to take my time and add them. One thing I noted was a thing for two part F42 antennas on top of the fuselage. I cannot find these in the kit so they were left off.

The final detail painting of pitot tubes and the like were done and the canopies added last and we were done. There are two pilot figures included but didn't use them.

This is a great kit and we can look forward to more coming. Highly recommended as a fan of the Phantom. My thanks to the excellent people at MRC Academy for the review sample and IPMS/USa for the chance to review it.

Finished Side View
Previous Next