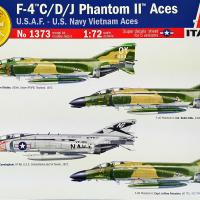 Originally developed as the Navy's primary fleet defense interceptor in the 1950'ss, the F-4 Phantom II rapidly evolved into the mainstay multiple fighter for the Navy, Air Force, and Marine Corps by the mid '60's. During the Vietnam War air war, the Phantom became the exclusive mount of all 6 American "ace" (airmen scoring 5 or more air-to-air victories) emerging from that conflict.

In this release, Italeri presents 4 of the F-4's flown by Americas Vietnam aces. Markings and parts options are included for Navy F-4J "Showtime 100" flown by Randy Cunningham and Willy Driscoll, Air Force F-4C flown by Robin Olds, an F-4D flown by Jeff Feinstein, and an F-4D flown by Steve Ritchie and Chuck DeBellevue.

Camden was inspired to do this build by the kindness of Col. Chuck DeBellevue, USAF (ret), America's leading Vietnam Ace, who spent an hour with Camden one morning while visiting Dayton, OH. During their breakfast meeting, Col. DeBellevue shared some of his war stories and wisdom with the aspiring young aeronaut, further fueling Camden's imagination and passion for military aviation…and his love for modeling.

Italeri leverages its basic F-4 sprues originally released in the 1980's with newer fuselage and wing parts featuring recessed panel lines. Parts are molded in light gray, with a single clear sprue with canopy parts. Some of the legacy sprues of 80's vintage show their age with noticeable flash along the mold parting lines, but the flash is a manageable and very minor inconvenience. While providing parts options for C/D/J radomes, only a single set of main wheels are included, it is for the Navy J-variant. Two sheets of crisply-registered decals is the differentiating element of the kit. The larger of the sheets is printed by Cartograf, and consists of markings for each of the individual aircraft, the missiles, and an extensive collection of stencils. The smaller sheet consists of the 4 US Air Forces "stars and bars" national insignia.

The relatively low part count made the build fairly quick and straightforward. Cockpit detail painting was expedited by the incorporation of decals for instrument panels and side console faces. Wing and fuselage assembly required a little extra care to ensure proper alignment and minimization of gaps, but some filling was needed on the fuselage centerline seam and at the wing root.

The instructions provide callouts for Federal Standard color numbers, eliminating the guesswork of color matching. We chose to use a combination of Italeri and Tamiya acrylics to execute the Southeast Asia color scheme, and used Minwax Gloss Clear Acrylic to provide a smooth base for decal application. Decals on the flat or gently curved surfaces laid down well, and responded positively to MicroSol and MicroSet setting solutions. As with other Cartograf experiences, the richly-colored decals for the vertical stabilizer cap and the missile bands had significant difficulty in conforming to the complex or small-radius curves inherent to those parts. Camden coaxed the stab cap decals with MicroSol and MicroSet best he could, and chose to omit the colored missile bands since the would not wrap around the missile bodies. Decals were sealed with a 50/50 mix of Future floor wax and Testors Model Master Acrylic Flat.

The reasonable price point, low part count, recessed panel lines, and great "Vietnam Aces" decals make the Italeri F-4 an attractive buy in a current marketplace starved for 1/72 F-4C/D subjects. Case in point: This kit caught Camden's attention since it had Ritchie and DeBellevue's "Old -463" markings. The sparse interior and fit issues will make it vulnerable to re-releases of other F-4C/D kits and F-4J offerings. All things considered, the finished product represents the actual aircraft fairly well, and we recommend it for beginning modelers and for modelers looking for a one-stop-shop for a "slammer" F-4 with Vietnam Ace markings.

Thanks to Hobbico for the review sample and to IPMS/USA for the opportunity to build and comment on this kit.