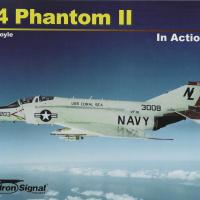 This is another of the In Action series of books from Squadron Publications, serving as a follow-up and addition to the previous two versions in In Actions 5 and 65 by other authors. This version includes many pictures not previously included, along with lots of color photos.

Naturally, my eye was initially drawn to the book by the full cover shot of the VF-111 F-4B in their early markings. And, having developed a love/hate relationship with the aircraft after working on the F-4 for over 15 years in the Air Force, I had to give it a look.

The book is divided by users of the aircraft then version, rather than simply by version. Each section includes color pictures where available and frequently include color side profiles showing specific markings. Some of the parts in the section on foreign users are rather small, with only a couple of pictures. Other than that, the book is fairly comprehensive in its photo coverage of the airplane’s history, given the restriction of 88 pages to cover everything.

So, is it the final word on the F-4? Nope. Is it a good addition to one’s library of photo coverage of the F-4? Definitely. It probably shouldn’t be your first reference for the Phantom, but is a good solid addition to the shelf.

As a side note, in the photos attached, the picture of the Thunderbirds Phantom is not upside down. As the meme goes, “I was inverted.”

Thanks to David Doyle, to Squadron Publications, and to IPMS/USA for the opportunity to review this book.