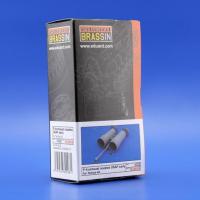 I received this conversion set with great anticipation and look forward to installing it on my latest venture.

I have built quite a few Tamiya, 1/32nd Phantom kits, since its debut. (a total of 77 to be exact.) I know this guy’s lying, but it's true. I used to build for a decal manufacturer that had over 100 decal sets for the F-4 and he wanted a model built for every one of them, all in 1/32nd. Well, he is out of business, so now I build for myself). I have used just about every aftermarket product out there for the F-4 and I'm always looking for something new. Eduard has come aboard with a very nice Exhaust Nozzle set.

Opening the package revealed some nice protective foam and each assembly was in its own plastic bag. No damage or lost parts. You get direct replacement parts for two engine intakes, discharges, tubes and nozzles. Also included is a new arresting hook. All the parts are of a very high quality resin casting and photo etch.

Let's start with the engine intake. This is a two part assembly. Some cleanup will be required, so be careful. I just wish the Tamiya intake tubes matched the detail of this kit. Unless you invest in some aftermarket intake tubes it would be a shame to hide them.

The engine discharges are a three piece affair. One resin and two photoetch make up the assembly. The engine tubes are a single piece so no seam to fill and the detail is really good. The nozzles are made up of two resin pieces, again very high quality casting and detail.

All three of these assemblies mate together to form one engine. You will have to repeat the process for the other side. There is a spreader bar supplied to connect the port and starboard engine together so they can be attached to the model.

A replacement arrestor hook is supplied and it looks a lot better than the original hook.

The instruction sheets are very good, straight to the point and easy to understand.

This conversion set does have its drawbacks. Nothing to do with the quality and detail (which is excellent) but has to do with the price and version limitations. It is expensive but will definitely enhance the kit and it is limited to F4 B, C, D and N versions of the Phantom. Some of the later E, F, G, J and S versions can't use it (but guess what, Eduard just released a conversion kit for those, number 632-010, late version F-4's, for the Tamiya kit).

HIGHLY recommended. One should have experience working with resin, photo etch, sanding resin parts and using ACC glues or epoxy.

Thank you Eduard Model Accessories for providing us with such a nice conversion set and thank you IPMS USA for giving me the opportunity to review and build it.