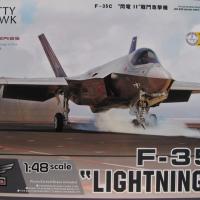 As I write this review, the real F-35C aircraft has recently been performing carrier qualification testing with the US Navy aboard the USS Nimitz (CVN-68), which lasted about two weeks. The C-variant is the last release of the F-35 series following the A-variant that will be flown by the US Air Force and foreign nations purchasing a land-based plane, and the B-model, meant for Short Take-Off and Vertical Landing (STOVL) capabilities required by the US Marine Corps and a few other nations. The F-35C is the navalized version of the plane, which has stronger landing gear, longer wings with hinged tips (for storage onboard aircraft carriers), a tailhook, and the largest internal fuel stores of the three versions. If you follow any articles about the F-35, you already know that it is one of the most controversial aircraft ever produced for the United States, and some initial foreign interests have dried up due to early production issues.

The F-35C itself is 51.5 feet long, with a wingspan of 43 feet (8 feet longer than the A and B models), the empty weight is 34,800 pounds with an internal fuel supply of 19,600 pounds. The advertised range is 1400 nautical miles, or a combat radius of 640 nautical miles. The plane is part of the “fifth generation” of jet aircraft, and is the first Navy jet to incorporate “low observable” or “stealth” technology.

This kit was my first experience with a product from Kitty Hawk, and overall the encounter was not too bad. There were a few challenges that I confronted during construction that may frustrate builders with limited proficiency with moderately complex kits. If you are interested in adding the US Navy’s newest jet to your collection, this is currently the only game in town, so to speak, but it is a good game.

Upon opening the rather large box for this kit, you will find 273 plastic parts spread across eleven sprues, one of which holds five clear parts. The majority of the parts are molded in a medium grey plastic that I found to be brittle in some instances, and soft in others. A photo etch fret is also included, and it contains 56 items in all. The directions are contained in a twenty-four page manual that combines full color and black and white images. The front and back pages are in full color, and they fold out to show the painting and marking guides for four different aircraft as well as all of the supplied weapons. The assembly instructions in between the foldouts consist of the black and white line drawings. Decals are provided on two sheets, one large and one small.

As is typical with most aircraft kits, construction begins with the cockpit then work through assembling the landing gear bays and installing them in the lower fuselage of the plane. I opted to leave the landing gear themselves off until I had painted the exterior of the plane, and this did not cause any assembly issues. Kitty Hawk provides a nice engine for the F-35, but once installed, only the exhaust end will be visible. Although I painted the intake and exhaust ends in the event that they would be seen, I only painted the outside of the exhaust end.

The paint scheme of the F-35 can be very daunting, as the majority of the photos show a dark grey plane with light grey leading edges on just about everything that can or might move. I found the site http://www.cybermodeler.com/aircraft/f-35/f-35c_profile01.shtml early in my research, and it shows a solid grey plane that it refers to as being FS 36170. They reference Humbrol 92 as being a match for this, and as luck would have it, I was able to obtain some for this project. As a side note, one tin is adequate for what you will need; I of course purchased two, just in case, and now have a spare. The site that I reference states that the markings on the plane are in FS 36375, but I found them to be much darker on the decal sheet. Aside from the Humbrol enamel, I used Model Master Acryl Gloss White, Interior Black, Olive Drab, and Insignia Yellow. I also used Vallejo Dark Rubber and Flat Black; Model Master Metalizer Aluminum, Burnt Iron, and Steel; and Tamiya Clear Green, Clear Red, Clear Yellow, and Smoke.

My construction tips are as follows: In step 1, although the provided figure fits the ejection seat well, once the seat is in the cockpit, the pilot will no longer fit correctly, and there is no clear spot to attach part G21. In step 3, there were no installation points for parts B33 and B34 in the weapons bays, but installing them would likely interfere with adding munitions. In step 6, swap locations for E8 and E7 as well as E37 and E47. In steps 8 and 10, I did not see any mention of drilling holes for installing the wing pylons, but I did not plan to use them on my build, so this was not an issue. In step 13, add hinges C26 and C27 to the front slots on C6 and C5. Although there is no mention of adding bombs to the weapons bays, two posts in each align perfectly with holes in the larger bombs. As I added weapons last, I ended up having to trim down the posts about 1/16 inch in back and 1/32 inch in front to get the GBU-31’s to fit, but this should not be an issue if selecting the GBU-12 or GBU-31B.

Regarding my hits for this kit, as I mentioned, this is the only currently available release of the F-35C in any scale. Kitty Hawk does a nice job with the level of detail in the moldings, and there was minimal flash to clean up. The decals settled well using only Micro Set, but I still give them a coat of Micro Sol out of habit. Markings are provided for four different aircraft from the first F-35C to one used by VFA-101 in the training of future Naval Aviators. The weapons provided are another hit with two each of the AIM-9X, AIM-120, GBU-12, GBU-31, GBU-31B, and GBU-38 as well as a reconnaissance pod. The photo-etched parts that are included are well made, and the seat belt looks good once installed.

As far as my misses are concerned, I was disappointed that the pilot figure did not fit, as one unique feature of the F-35 is that it has no Heads-up Display (HUD), but this is instead provided on the unique helmet visor (one of the early production issues). I found some of the decals were brittle such as the bomb stripes and large tail markings. Some part locations are vague in the instructions, and no mention is made of adding any of the bombs to the internal weapons bays, just the AIM-120 missiles. There were also some fit issues, most notably with the wing to fuselage joints and tail assemblies. I also had instances where removing the parts from the sprues led to divots or parts breaking, and my main landing gear part E7 was not fully molded (in all fairness, I opted to fix the part myself rather than contacting Kitty Hawk for a potential replacement).

In conclusion, I would still recommend this F-35C kit to any enthusiast wanting to add the next phase of Naval Aviation to their collection. In 1/48 scale, the plane is slightly larger than an F-16 (or slightly smaller than and F/A-18C), so it is not a huge commitment to display shelf space, and aside from the old Panda release in this scale, is the only C-variant on the market. Kitty Hawk recommends this kit for ages 14 and over, and I would suggest that modelers have a few kits under their belt before taking on this build due to the complexity of some of the assembly steps.

I would like to thank the fine folks at Kitty Hawk for being gracious enough to provide this kit to the IPMS-USA for review! I also like to thank Dave Morrissette for his time and efforts in running the Review Corps as well as allowing me to perform this assessment. I also appreciate the folks behind the scenes in the Review Corps who keep the review machine running so well, and finally my most sincere gratefulness to all who take the time to read this.

I am very disappointed with KITTY HAWK's F-35C LIGHTNING II model build. This is a very hard and complicated model to put together and even dry fitting does not help. Then there is the assembly sheet that gives little to hardly any detail to how to paint and what color paints to use. I've had to rely on the internet to get descriptions information that would benefit the build but I will never purchase another KITTY HAWK model ever.