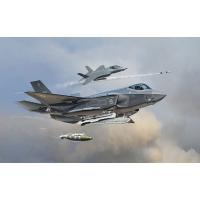 Thanks very much to MRC for providing us this little gem, and thanks to Italeri for producing it! (and the usual appreciation to Dave and Dick for sending it my way to review...)

This model requires a bit of skill, only in that it has many miniature parts which require care in installation. We'll address that more later, but the basic model is excellent in presentation and delivery.

This kit was first “out the chute”, as our rodeo friends say, on the market for a decent, accurate F-35 production-representative model. I gave up on another company's 1/48 build, as I did not care for the tail plane inaccuracy (serious dihedral out of the box) and other issues. Italeri's kit is much better overall... now they need to pantograph it out of Braille-scale for us old guys. It would even make a great 1/32 kit, as it's relatively compact as fighters go. Box art is well done, and the now familiar license logo from Lockheed Martin is prominently displayed on the box.

Molded in light gray on two runners with clear parts in a separate bag, the overall presentation is positive. Plastic is a bit soft, and detail is slightly heavy but it's a nice kit. Construction starts with the intake ducting; these fit positively and no filler is required for the seams; Italeri's plastic is slightly soft, which makes use of liquid cements a perfect match for seam filling. Two fuselage panels are incorporated into the intake area, just below the cockpit. Put a bit of effort into this area, as the top part of the intake and forward fuselage key on these parts; they should be a seamless line from front to back on the nose chine area.

The cockpit was next; this is where some of the miniscule parts come into play, as the throttle and control stick on either side of the cockpit are about 1/8 of an inch long. Careful with the tweezers. As most of the cockpit is buttons and flat panels, there are not a lot of details in this scale. There are decals for both side panels and the instrument flat panel group. These worked well, but you can't see much; the cockpit, from what I could determine, is all flat black, including the seat.

Installation of the cockpit tub is positive, and the seat drops in. You have an option at this point of installing the canopy actuators on the front of the cockpit coaming, but I decided this looks really out of place (AKA the “Mig 21” canopy look) and would be a great way to cause myself frustration, so I went with the closed canopy.

Next step is the engine; please note you cannot see anything of the front from the intakes due to their “stealth” ducting, so painting the front is a non-player. The engine consists of two halves, upper and lower, a compressor face, an augmenter flame holder grid, and the unique exhaust petals with the sharp tail section; these are particularly well done. Put it together, paint the augmenter section white for the ceramic coating, a bit of black wash on the flame holder grid, and stuff with paper towel when done until you have finished the model. The engine installs on the top fuselage section. Main landing gear is next; both wells are detailed, and you must install the gear before gluing the wells in place. Just not enough room to do it afterwards... The nose gear well is molded with the lower fuselage section, and is similarly detailed. At this point you install the lower fuselage. If you were careful in your work, everything will line up and fit great with no filler required.

Control surfaces are all separate and fit great. The vertical fins in particular were very tight and no seam occurred.

As I was closing the canopy, it was time to do the seat. The instructions show this as the last construction step, which is logical because otherwise you will probably break off the canopy before you finish the model. I needed a good seal around the closed canopy for painting...

The Martin Baker lightweight ejection seat is a four-part effort; with two sides and the seat back/pan, it was a bit tricky until cement is applied, but looks good in the end. A seat harness is provided on the decal sheet; it's the exact same artwork as most Italeri seat harness art (In this case, it was used on their F-5 kits from 30 years ago) so I left it off, as it's not correct for this seat. Installation of the canopy and the forward lower chin clear sensor housing at this point proceeded; liquid cement worked well.

I then painted the entire model with Tamiya Gunship Gray 2 spray; when dry, the fun begins. The Radar Absorbing Material (RAM) which covers the aircraft where various panels are removed is provided as raised detail as seen on pictures of the actual aircraft. Many will go nuts over the fact it's probably too pronounced, but it sure made painting easier... The instructions would have you paint them Gull Gray; I opted for Neutral Gray, as it seemed more accurate to my eye. I have switched over to Vallejo paints for brush painting, and this was a wise decision on my part. Using a fine-line brush (probably about #1, which holds enough paint to do a section without lifting the brush) I touched on every RAM panel, including the wings. This took about an hour and a half, but in the end was great. I had tried to mask and spray on another model, and was disappointed because I had cut marks all over. Not a good option. The Vallejo worked great!

Clear gloss (Testors' Boyds) was next, then decals. The decals worked great; you have markings for British, Italian, and US aircraft, but only instructions for the US Operational Test, Edwards, and First Production aircraft at Tyndall, which was my choice. They had great density and were not too thick. I used a bit of Solvaset on them to ensure silvering was not an issue.

Time to do the weapons bays. I used Vallejo white, did a bit of wash to bring out the details, and then it was time to build bombs. Two GBU 31 JDAM are included, along with two AIM-120. The missiles have really deep scribing on them, but paint fixed that. In retrospect I should have used Dark Ghost gray on the weapons; I had used neutral gray, which came out too dark. Install the wheels, nose gear and tires, and the various gear doors.

A note on the weapon bay doors; if not installing in the closed position, you have to carefully cut off part of the doors and install on the inner section. Also, the mounting brackets for the missiles are integrated on the door actuator/stiffener bulkheads; follow the instructions and they will be in the right order.

DONE! A fun build, and it looks like the little beast I saw flying around Edwards a few months ago. Thanks again to MRC and Italeri for bringing us this great kit!