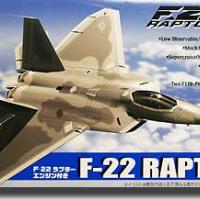 Several kit manufacturers have released the F-22 in this scale and now Fujimi has jumped into the fray. As far as I know, this release is there first 1/72 aircraft in many, many years. If you are familiar with any previous Fujimi kits, you know they are high quality and well detailed. The Raptor continues that tradition.

Upon opening the box, I was surprised by the number of parts for a 1/72 fighter – 170 in all (including 35 for the engine cart). There are no less than eight bags of sprue including two clear sets (one totally clear and one tinted smoky gray). Molded in light gray plastic, the surface detail is exquisite and there are many finely cast small parts. Fujimi also included the option of moveable parts: flaps, engine exhaust petals, horizontal stabilizers, and canopy. Other control surfaces are separate and can be positioned any way you like. A nice touch is two detailed engines that can be removed from the aircraft and one displayed on a separate dolly. They also provide two sets of weapon bay doors and gear doors: one set for flight and another set for displaying everything opened up on the ground. Weapons include air-to-air missiles and two guided bombs. Two wing drop tanks are also provided. The decal sheet has options for four different machines. Color and register were spot on.

Generally, the instructions have you build several interior sub-assemblies then glue the upper and lower fuselage halves together sandwiching the sub-assemblies. The process of getting there, however, has a couple of challenges along the way. In several key areas the instructions are confusing. I think the folks at Fujimi tried to show too much detail in their exploded view drawings making the location of some parts ambiguous. All the sub-titles are in Japanese, so perhaps they explain things a little better.

I mostly followed the assembly sequence, but did make some changes to facilitate painting and the fact that I wanted to show all the bays open and the flying surfaces displaced a bit. I chose to have nothing moveable, though. After painting all the interior parts white, I added the weapons bays to the model, but not the weapons. I tacked on “in-flight” doors as masks for later painting. When installing the side bays, note the molded in “black boxes” in the bays are on the bottom, close to the ground. The instructions do not call for ballast, but I added about twenty grams since there is a lot of plastic aft of the main gear. I tried gluing the main gear wells together and later adding the gear struts, but I wouldn’t suggest doing it that way. Here, follow the instructions and glue all pieces together at once. Though not accurate, I positioned a small brace across the top of the main gear inside the wheel well for added strength.

The intakes have a complex shape which Fujimi captured very well. The left intake slipped in place easily, but I had to fiddle with the right one. I also had to sand the top of that intake to allow the upper part of the fuselage to mate with the lower half. Next, I added the cockpit which has raised detail, but I left out the seat until later. Unlike me, you need to assemble the seat and dry fit it into the cockpit tub. It’s a very tight fit and will require some sanding to set in properly. There are no belts or harness molded into the seat and the ejection handle at the front of the seat cushion is not included.

Except for the area around the right intake roof, the fuselage halves went together without problems. Only a little bit of filler was needed under the intakes. Another area needing attention is the vertical (well, not so vertical) stabilizers. Fujimi has opened a slot on the outer surface near the “slime” formation lights. I looked at many pictures on the internet and in my references and didn’t see any opening there. I think they mistook the black strip behind the lights for the shadow of a slot. At any rate, I filled them and sanded them smooth. Finally, the nose gear assembly is problematic. At the final step of the instructions, you have to slide the strut and its supports into five openings in the nose wheel well. It would be easier to work on this earlier rather than in this confined space. I suggest you fit everything together and glue the assembly except where it attaches to the fuselage. Have everything set so you can add it near the end of construction. I didn’t do this and had to fiddle with these tiny pieces when the model was almost finished. In my experience, manipulating the kit at this late stage leads to broken pieces. My last task was to add all the flying surfaces including the vertical stabilizers. There was a small seam between them and the fuselage which I filled with white glue.

Get out lots of your favorite masking tape and patience. The masking and painting guide section of the instructions are useful, but I also consulted several other references. Essentially, all the “edges” of the jet are painted in a light gray color and need to be masked off. Since this holds true for all the flying surfaces as well, masking will take a little time.

There has been much discussion about the actual colors of the F-22. Is it metallic or not? Not having seen the actual aircraft up close, I relied on photos which show different shades and also lead to interpretation. I finally decided to paint the model depicting the metallic sheen. Fujimi has you mix Gunze Sangyo grays and metallic colors to achieve this look. I tried this recommendation, but it was not to my taste. Though I kept to the Fujimi formula for the light gray “edges,” I used a different approach for the rest of the model. I experimented with several mixtures and repainted my model twice. Hey, when is that deadline again? My final colors were as follows: the lighter areas of the aircraft inside the “edges” are a mixture of Testors Metalizers – equal parts of Aluminum Plate, Steel, and Dark Anadonic Gray. For the darkest areas, I sprayed Testors Metalizer Titanium. This was still not exactly what I wanted so I sprayed the entire model with a heavily thinned coat of the original gray color I mixed for the “edges.” This step made it look closer to what I wanted.

I’ll admit to a mistake here. When masking the front of the intakes, I made the gray area a constant width around the entire opening which isn’t correct. The side and bottom portions of the light gray are narrower than the top.

Since completing the model, I have see a new product from Hawkeye’s Hobbies LLC called “Raptor Sheen” which is an additive to enamel paints to achieve the look of the F-22 and F-35 finishes. They say they will shortly have a similar product for acrylic paints which I hope to try on my next F-22. A coat of Pledge Floor Polish with Future was the final step.

The decal sheet is extensive with options for four aircraft and even includes over thirty “remove before flight” streamers. On flat surfaces the decals snuggled down nicely, but on curved surfaces they didn’t. Many of the decals are a little too large for the area they are designed to cover. I thought I could use setting solution to get them into the recesses, but the decals (4 x number 60) cracked instead. For number 73 which is a light gray decal placed behind the canopy, I wound up painting the area instead of using the decal. I just couldn’t get it to adhere to the compound curved area.

When gluing on the many doors, match their shapes to the openings. A couple of doors are mislabeled on the instructions: C23 and C24, C2 and C1. When installing the flying surfaces, I dropped the flaps, let both ailerons droop a bit, and positioned both rudders canting slightly outward. Installing the nose wheel assembly gave me problems, but you can avoid that with some early planning as I previously mentioned. The final area where I had some issues was the navigation lights. Fujimi provides these as clear diamond-shaped flat pieces with a bump over the light itself. They are numbered for specific locations and since I took them off the sprue for painting, I couldn’t tell which was which. I had to sand down the edges to get them to fit their respective indentations. The engines slip into the fuselage, but the fit is extremely tight. I plan on leaving mine in the fuselage. Since I wanted the canopy opened, I used white glue to tack the mechanism in place. This approach proved very strong and allowed me time to position all the pieces.

After all I said here about various problems, I think this is still the best F-22 in this scale. Just like the real article, however, it’s expensive. The price will probably deter the beginner which is just as well. Given the state of the instructions and the numerous small parts, I recommend this kit only to someone with several model builds behind them. The whole building and painting process took me about two months with time out for the holidays. I am very pleased with the result and recommend it. I would sure like to get close to the real thing to see how the finish looks.

My thanks to John Noack and Fujimi (Dragon USA) for the opportunity to review this kit.