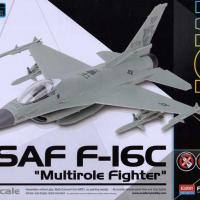 Developed in the 1970’s and first fielded in the early 1980’s as the US Air Force’s lightweight multirole fighter-bomber to replace the F-4 Phantom and A-7D Corsair II, the F-16 Fighting Falcon established itself as one of the most capable, reliable, and cost-effective aircraft in US Air Force history. One of the specialized roles the F-16C inherited from the F-4 was that of Suppression of Enemy Air Defenses (SEAD), in Air Force parlance known as “Wild Weasel.” F-16C Block 50 and 52 aircraft equipped as Wild Weasels began production in 1991, and still serve as USAF’s primary SEAD platform.

Targeted for new and young modelers, Academy’s well-proportioned likeness of the Block 50/52 F-16C comes equipped with stores clearly depicting it in the Wild Weasel role. No landing gear is included, as the kit is intended to be posed on a stand in the in-flight configuration. The MCP (multi-colored parts) kit is molded in light gray, dark gray, and black plastic, with the stand molded clear. Exterior surface detail is recessed and crisply molded, accurately depicting production aircraft. Cockpit detail is sparse, and surprisingly, no pilot figure is included. Weapons loadout includes AIM-120 Advanced Medium Range Air-to-Air Missiles (AMRAAM) and AGM-88 High-Speed Anti-Radiation Missile (HARM). Instead of water slide decals, peel-and-stick stickers provide markings for 2 aircraft.

Since the targeted demographic of this kit is kids, I enlisted my 10 year-old son, Camden to conduct the build. Camden is a veteran of many prior IPMS reviews, and was eager to undertake this build. It should be noted, at this point, that he did opt to paint the kit, apply aftermarket decals, and Camden insisted on inserting a pilot from another F-16 kit to give a more-credible in-flight depiction.

Aside from hacking a pilot from another kit and painting the cockpit interior, Camden had the kit assembled in less than an hour. Snap features of the kit were excellent, and joints generally fell on natural panel lines or seams. It was one of the best snap-fit kits we’ve seen to date. As noted, we chose to forego the stickers, which would have likely taken about 15-20 minutes to apply.

Wanting a contest-worthy Viper (the pilots’ nickname for the F-16), Camden opted to paint and decal the review kit. Testors Model Master Acryl Neutral Gray (FS 32670) and Gunship Gray (FS36118) were used on the airframe, and Dark Gull Gray (FS36231) was used on the radome.

Decals were Two Bobs’ “50 Years of YGBSM,” commemorating the 50th anniversary of Wild Weasel operations with special markings from a 20th Fighter Wing F-16C stationed at Shaw AFB, SC. Review of the decals can be found here.

Academy hits its primary target market with a fabulous snap-fit F-16C, and we highly recommend it for first-time and young modelers. The excellent surface detail and accuracy of exterior detail make this an excellent desktop display model when painted and decaled, and we also highly recommend it for modelers looking for a quick, attractive build to display on a desktop.

Thanks to Model Rectifier Corporation for the sample kit and to IPMS/USA for the opportunity to present this review.

Belly view of completed model, as yet unpainted

Painted and with aftermarket decals applied - Left profile
Previous Next