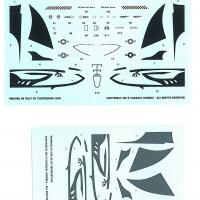 In 2014, the 482 Fighter Wing painted up one of its F-16C’s to commemorate its 25th anniversary. The jet was decorated with a mako shark motif including a shark mouth on the intake, a shark head on the forward fuselage and a shark fin on the vertical tail. The motif was created by modifying the standard F-16 scheme to incorporate the shark design.

Caracal Decals has recreated these markings on sheet 72033 allowing us to depict this unique aircraft. The sheet includes a full set of markings for the jet including the shark fin for the vertical tail, the pectoral fins for the ventral fins and the stylized shark head for the forward fuselage along with the serial numbers, tail codes and the Florida Makos legend on the tail, as well as the standard inflight refueling markings, national insignia and basic stencils. The decals are designed for Tamiya’s new F-16C kit, however, as I had already started my Tamiya F-16 as a Wild Weasel F-16CJ, I substituted an Italeri F-16C from my stash and other than having to shorten the decals for the ventral fins a little bit, the decals fit the Italeri kit as if they were made for it.

On the actual aircraft the shark motif is a modification of the standard F-16 Gunship Grey upper surfaces paint scheme. As a result the medium grey on the upper surfaces extends back further towards the tail than on the normal scheme. The decals recreate this by providing just the dark grey outline of the shark head, with clear decal in between to allow the underlying medium grey to show through. The instruction sheet recommends you go to Caracal’s website and download a template for masking off the medium grey portion under the shark head, but when I compared the printed template to the decals, the templates turned out to be much smaller than the decals. To address this, I photocopied the decals and then used the paper copy of the shark head as a template to mask off the medium grey (see photo below).

Unfortunately, as printed, the shark markings on the decal sheet are almost black instead of Gunship Grey that they are supposed to be. To correct this, Caracal has included a second sheet printed by MicroScale providing replacements for the shark markings in a dark grey.

I used Tamiya paints based on online color matching websites when I painted the model and achieve the contrast I was looking for between the medium grey (XF-66) and the Gunship Grey (XF-24). However, when I went to apply the replacement shark markings to the kit, they turned out to be the same color as the medium grey I used, not the gunship grey they were supposed to match and they disappeared against the medium grey. I next tried the original decal sheet markings to see if they would blend any better, but they did not as they were still black. As I was removing the kit decals, I managed to flip one over and discovered that under the black finish, the original sheet decals are dark grey and it actually matched the XF-24 paint I had used for Gunship Grey. I then tried the same thing with the tail fins and the pectoral fins and found that once they were reversed, they all matched the color I used.

With this issue resolved, I finished the decaling, applying the tail codes, serial numbers and the 25th Anniversary banner. The decals reacted perfectly with Micro Set and Micro Sol settling down and conforming to all of the lumps and bumps on the kit, including the vents on the gun housing on the left nose chine. Once everything had dried, I washed the model to remove any excess Micro Set and Micro Sol, sprayed it with clear flat and un-masked the canopy and ended up with a really cool replica of a nice and aggressive looking Viper!

Other than the color matching issue, which fortunately worked out for me, I really enjoyed this build once I figured out how to mask for the shark head. I highly recommend these decals to anyone interested in creating a replica of the Makos flagship, but check your paints early to see if they match either of the sets of decals.

Thank you to Caracal for the review sample and to IPMS-USA for letting me review it.