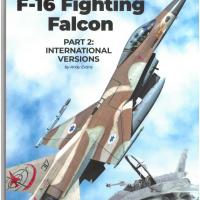 As a lover of Small Air Forces the F-16 is one of my more popular aircraft as it is used by 25 nations besides the US and more are on the list. This book covers those in use by these 25 nations (book 1 covered US versions) by splitting them up geographically. Chapters cover European Falcons, Middle Eastern, Asian and African and finally Latin American F-16s. Full color pictures illustrate each nations aircraft and the writing covers the history of each nation in some detail including acquisition and use including combat. The pictures are good size and give good information regarding the markings and schemes carried.

The next sections is Colour Side Profiles which covers 24 profiles over 6 pages. These are all port side only and are well done.

The Walkaround section is next and something different than the usual is the inclusion of walk arounds of F-16s from Poland, Greece, Denmark, Israel and the Netherlands. Pretty much anything specific to each air frame is covered with good quality shots.

Another thing F-16s are known for are colorful schemes and these are covered in 2 sections, Specially Marked F-16s and F-16 Tails.

The book finishes with a Modelling section which covers builds of 6 48th scale Fighting Falcons, a Tamiya kit, Hasagawa and 4 molded by Kinetic. These range from basic builds to more detailed builds using aftermarket parts. This is one area I felt lacking as I would have liked to see builds of kits in other scales, at least 72nd and 32nd scales.

Overall I enjoyed the content of the book, especially the pictures and profiles though some of the writing got a bit more technical than I need.

Thanks to Phoenix Scale Publications and IPMS/USA for the review sample.