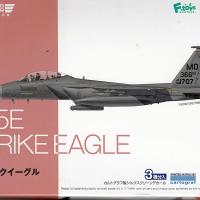 The F-15E Strike Eagle is a development of the F-15. The concept of the Strike Eagle was to produce a bomber aircraft which also had fighter capability. The biggest visual differences between the E model and earlier F-15s are the two-seat cockpit and the addition of conformal fuel tanks on the sides of the fuselage.

This F-15E is a reissue of a kit previously sold as part of a multi-kit collection from F-Toys which contained an AV-8 Harrier, An A-10 Thunderbolt II and an F-15E. The kit is designed to have the parts pressed together, with little or no glue needed. As such, there is some filing and sanding required to get an acceptable fit. You get two aircraft in the box, and decals for 3 planes.

The assembly is pretty simple. The seats are glued in the cockpit, the instrument panel is inserted, and the cockpit assembly is placed between the forward fuselage halves. I glued the fuselage parts together. This was a mistake.

Step 3 is assembling the main part of the fuselage, top and bottom halves. Be sure to put in the two exhausts at the rear of the fuselage before assembly. If you don’t you have to cut the connection between the exhausts and insert them individually. Yes, I had to do that. Also in step 3 is putting on the vertical stabilizers and the intakes.

Even with all this, this assembly took less than 2 hours. Very fast.

Step 4 starts by attaching the conformal fuel tanks, which go on nicely, with no problem. The tough part of this step is drilling two holes in the bottom of the fuselage, one 2 mm from the front and one 3 mm from the front, along panel lines. These are for the two sensor packs under the fuselage. The tough part for me was finding a metric ruler which was readable with millimeters on it.

Step 5 on the instructions is painting the aircraft. I decided I’d like to do the F-15I from the Israeli Air Force. I had a little trouble seeing the paint scheme on the instruction sheet, so I scanned it and printed a version about two times as big. The other problem many modelers may have is that the colors are given with Mr. Color and Model Master paints. Unfortunately Model Master doesn’t produce some of the colors. My bad habit of buying a lot of paint which I may not need paid off here, and I had the MM paints.

I put on a coat of Future to give a gloss surface for the markings.

The decals for the Israeli Strike Eagle were wonderful. They came off the paper nicely, allowed some adjustment, and stayed where I put them after I used a tissue on the excess water. But that’s what we’ve grown to expect from Cartograf, who are a top decal maker.

After the decals sat overnight, I put a coat of clear flat over the whole aircraft, which made the decals blend in nicely.

Then it was time for Step 6, the “fiddly bits”, which I leave off anyway because I break things while doing decals. The guys at Platz/F-Toys seem to know this about me. The two sensor pods, the underwing fuel tanks, the bomb racks and the landing gear all went on with very little trouble. Tamiya Extra Thin cement works beautifully on these parts.

The final assembly was the canopy. This assembly is designed to simply snap into place on the cockpit opening. But it kept wanting to open up a seam between the fuselage and the bottom of one of the canopy sides. I took care of this with an application of Micro Krystal Klear. I used some tape to hold the canopy on until the glue set.

Recommended. The kit is simple but goes together well. Some work is needed to get all the parts to fit cleanly because the parts are designed to stay together without glue, which compromises some of the parts fit. The decals are so very good. Also, this kit will stand up to pretty rough handling. I managed to paint and decal the whole model without damaging the two prongs at the tops of the vertical stabilizers.

Many thanks to Plats/F-Toys for this nice kit, and thanks to IPMS USA for providing me with a different F-15 for my display.