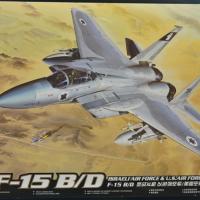 Great Wall's 1/48 scale F-15B/D kit has generated a flood of commentary on the internet forums regarding its accuracy or lack thereof. Some of the complaints are justified, if sometimes verging into the area of extreme nit-picking, and some are not. This review will not rehash the controversy but rather will concentrate on building what is in the box to best advantage.

My primary references for this project were Reid Air Publications “The Modern Eagle Guide” and Isradecal Publications F-15 Baz. The latter is indispensible for information and detailing on IAF Eagles, and the former is the best available reference on the Eagle in general. The 26 page instruction booklet is fairly well done, although some of the illustrations are a bit vague. Packaging is first rate, especially the missiles. No parts were broken or detached from their sprues.

The kit is molded in typical gray plastic, with very well done surface detail consisting of recessed panel line and fastener detail. Some of the detail is very petite and overall molding quality is of a high standard. Clear parts are also well molded. Cockpit detail is very well executed, with crisp and accurate raised detailing. The sidewalls are molded as separate parts, allowing nice detailing on these very visible areas. Referring to the Reid book, the cockpit appears quite accurate for an early USAF F-15B/D or an early Israeli aircraft. IAF Eagles were upgraded considerably through the 1990's and the entire fleet had been upgraded by 2004. This upgrade resulted in a radically different rear cockpit that more closely resembles an F-15E pit (though it's not exactly alike). Thus the kit cannot be built as an Improved Baz, as the IAF designates the upgrade, without serious modification. Both the early ESCAPAC and later ACES II ejection seats are included, but appear to be somewhat tall and out of proportion and no seat harness is included. I substituted Quickboost ACES II seats. If you do use aftermarket seats remember to shorten the kit seat rails. Note that IAF aircraft carried ESCAPAC seats until 1993 and ACES II thereafter. USAF made the seat change much earlier. A nice touch is provision of individual decals for the instrument panel dials and displays. Using these is a bit tedious but the results are worth it. The complex and substantial inner canopy framing is also molded separately and canopy actuators are included. I added canopy locking hooks from a Reheat PE set (sadly no longer available). The head up display framing is provided in photo etch with a small clear acetate sheet for the display glass.

The radome is separate and can be displayed open to reveal a nicely detailed radar unit. The forward avionics bays are also molded open and the various electronic devices are nicely reproduced. Again referring to the Reid book, this detail appears reasonably accurate. I chose to close the radome but opened the avionics bays (partly because the radome fits flawlessly but the bay doors have some small fit issues if closed). The avionics were detailed with small bits of scrap decal and fine colored wire, following the photos in the Reid book. The result looks suitably busy.

Full intake trunks are provided, and the intakes can be built in either fully up or drooped condition. The up condition is most frequently seen on parked Eagles. Two full engines are provided, but cannot be seen after the model is built; this seems to be a favorite practice of Chinese companies that is mystifying to American modelers. Only the 'featherless' afterburner cans are provided. This is correct for almost any USAF bird, but most IAF Eagles retain the covered exhaust. Examining the Isradecal book revealed enough photos of IAF birds with the uncovered exhausts to make me feel OK about using them, however. The detail on the exhausts is somewhat simplified but is not bad for injection molded styrene.

The flaps, ailerons, and speedbrake are separately molded, and all fit well. The usual condition of a parked F-15 appears to be flaps up, ailerons drooped, rudders neutral, stabilators drooped, trailing edge down and speedbrake closed, and my model reflects this. Both the thin and fat vertical stabilizer tips are included - check your references for the aircraft you are building. The extreme tips of the aft fuselage extensions are molded in the sharply pointed F-15B style. These were quickly replaced with a rounded tip containing ECM gear, sometimes on one side and sometimes on both. I scratchbuilt the rounded style on this model. Strangely, the instruction booklet shows the proper rounded style although the kit does not include it. The horizontal stabilizers have rather pronounced raised strips on both sides, which looked wrong to me, but the Reid book indicates that these are sealing strips found on F-15E airframes and occasionally found on earlier Eagles as replacement parts. I used them as is but you may prefer to sand the strips off. You may also wish to thin down the stabilator trailing edges while you are at it. The landing gear struts are nicely done, and all landing gear doors are separate. On a parked Eagle only the aft nose gear door and one each of the main gear doors remain open. The gear bays are lightly detailed, but if the doors are properly closed little can be seen anyway. Wheels and tires for both the lighter F-15B and the heavier F-15D are included, but reveal a major mistake. The tires are molded with flats, but the flats are somewhat overdone (F-15 tires are very high pressure and do not deflect much), and worse yet the flats are 90 degrees out of phase with the inner hub brake detail. Someone really should have checked that CAD model! Great Wall has since corrected this issue as well some others, and made the replacement parts available to kit buyers.

Stores include three drop tanks, underwing pylons, four each AIM-7 Sparrow, Python 3 and Python 4 missiles. The missiles are very nicely done and cleverly molded with all fins integral with the missile. The unique Python launch rails are provided, which differ from the US Sidewinder rails due to the greater span of the Python fins. Herein lies another problem - I discovered at final assembly that the Python 4 fins fouled on the wing bottom. After double checking that I used the correct launch rails I had no other fix than to shorten the rear missile fins. You will need to remove 1/32 inch per fin if you choose this fix. Neither Sidewinder missiles nor their launch rails are included. Since even unarmed Eagles usually retain their wing pylons with launchers you cannot build an entirely accurate USAF Eagle out of the box.

Despite the complex shape of the Eagle and the kit moldings, overall fit of the parts ranges from good to very good - mostly very good. I used filler in a few places but the build went smoothly with few problems. I used Model Master enamels throughout the painting. Alclad was used on the aft hot section and exhaust assemblies. The kit decal sheets (there are four of them) provide markings for a USAF F-15B and two F-15D’s, and an IAF F-15B. The sheets are very comprehensive including all stenciling and even the tiny individual panel numbers. F-15's left the factory with each removable panel numbered but these numbers disappeared from USAF Eagles at the first repaint. IAF birds appear to retain them. The decals are well printed but a bit thick and feature a flat finish. I used a few of the kit decals and they performed acceptably, but most of the markings were taken from an Isradecal sheet which I believe is no longer in production. Applying the many, many decals took about 15-20 hours, but the look is definitely eye catching. The model depicts an F-15D prior to the Improved Baz update. Be aware that the dramatic swooping eagle tail markings on the decal sheet are not unit devices but indicate that the aircraft is an Improved Baz. For that reason I reluctantly left them off my model.

My final impression of this kit is generally favorable despite its undeniable flaws. Whether it is worth the rather high asking price is a question only the individual modeler can answer. I enjoyed the build and am happy with the finished product. As this is written Great Wall has announced an F-15C kit for imminent release. The CAD images published indicate that many of the issues with the B/D kit have been addressed, and the single seat kit will represent a current F-15C with all the MSIP upgrades including the F-22 style AESA radar and AIM-120/AIM-9X missiles.

My thanks to Great Wall Hobbies, Dragon Models USA and IPMS USA for the review kit.