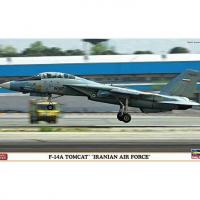 In 1972, the Shah of Iran visited the US to evaluate two interceptor airplanes, the F-14 and F-15, for protection of his borders against overflights of the MiG-25. A contract was signed to purchase a number of F-14s due to superior maneuverability and weaponry. As it turned out, the sale of some F-14s to Iran gave Grumman the funds that they needed to continue Tomcat production. The best pilots from Iran came to the US and were well trained in advance of the deliveries which started in 1974. During it’s time in the Imperial Iranian Air Force, IIAF, the Tomcat performed its role well.

In 1979 the Islamic Revolution toppled the Shah and established a harsh Islamic regime. A number of the trained personnel fled but many remained. Once Iraq invaded Iran, many of these former “Shah’s pilots” and technicians were allowed back in service and the Tomcats asserted themselves well against Iraq’s aircraft.

In spite of the fact that replacement parts were not available, the technicians of the Islamic Republic of Iran Air Force, IRIAF, have done a good job of keeping these impressive aircraft flying. The camouflage scheme specified with this kit was applied in 1995. Anyone interested in a great history of the Tomcat in Iranian use should read Osprey Combat Aircraft book #49, Iranian F-14 Tomcat Units in Combat.

As near as I can tell, this basic kit has been available for many years although the moldings are still crisp and virtually free from flash. The kit contains ten sprues of gray plastic parts, two sprues of clear parts, a sheet of photo-etched material and a decal sheet with all major and most minor markings. Markings for four aircraft are provided but the only difference is numbers. The assembly instructions provided are from an earlier kit – “Atlantic Fleet Squadrons” – with a single sheet being added covering Iranian painting and decal locations.

Assembly starts with the cockpit and then the nose section. Cockpit detail is improved by photo-etched parts being provided for most of the various panels with decals used for the instrument panels. The nose assembly comes next. This incorporates the cockpit and the nose wheel well. A couple of panels on the side of the nose can be shown open with ladders attached for an interesting ground pose. The next two major steps cover the fuselage/engine assembly and the wings. These go together well with several alternatives being provided. The instructions for the Iranian version direct the modeler to follow the assembly alternatives for the VF-102 Atlantic fleet variant. Dive brakes, engine tailpipes and the leading edge extensions can be posed open or closed. At this point the model is ready for painting.

The color scheme of this IRIAF Tomcat is a camouflage pattern of Light Gull Gray and a light blue on the upper surfaces with the blue color completely covering the undersurfaces. The instructions call for the blue to be a 50/50 mixture of Light Gull Gray and Bright Blue. I tried this mixture and felt that it was too dark. I finally painted my model with an approximately 25/75 blue/gray mixture and feel that it is still a little too dark but I didn’t want to repaint the model again. Following painting, the landing gear, canopies and a number of small antennas and other parts were added. The main canopy appearance is enhanced by the addition of some photo-etched parts. Transparent parts are also provided for several formation lights.

The kit includes a myriad of external weapons for the Tomcat. I decided not to add them to my model because most of the photos of this airplane show no external weapons.

While the molds for this kit have been around for years, the kit remains a great representation of the Tomcat. Hasegawa have issued it several times with different markings and some different armament. I jumped at this kit because I love to build models with different small air forces markings, plus I didn’t have a Tomcat in my collection. The kit has a number of very small parts, two of which disappeared for me, but it can be built by most modelers with just basic experience. The key is to follow the excellent and detailed instructions.

Well recommended. My thanks go to Hasegawa and Hobbico for producing this interesting marking this variant of the Tomcat and to IPMS for letting me have this build.