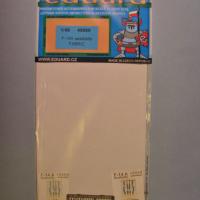 In case you missed the IPMS-USA Nationals this past summer, Eduard released a 1/48 scale F-14A Tomcat as part of a special “Danger Zone” packaging that includes a slew of photo etch and resin detail parts along with the plane. I mention this as some of the detail items, such as this set are now being released to further spruce up the Limited Edition release. This set includes fabric seatbelt pieces as well as the photoetch parts for all of the connectors, buckles, etc.

This new detail set does not have a recommended 1/48 scale F-14A kit mentioned, so I put my Hasegawa release to use, and built up the included GRU-7A ejection seats in order to conduct this review. The set consists of two pieces of paper for the seatbelts themselves, and a single photoetch fret for the remaining items. If you take your time, and follow the instructions, a very nice set of seatbelts will result, and will improve the appearance of your ejection seats. The “textile part” as mentioned in the instructions are printed in a blue-grey color, and they have a paper backing that will separate with reasonable ease. Although the instructions mention crumpling the belts, I opted to build them skipping this step in order to prevent possible damage to the belts, as some are very thin.

As far as my hits are concerned, I have never seen a product quite like this, as the fabric belts are in pieces that you assemble, rather than being single pieces for the shoulder straps. I did find the straps far easier to install than ones that are made entirely of photoetch metal, as they are easier to form to the ejection seat itself.

My only real miss is that in step A, part TPI is actually TP1, and in step B, part PE7 is really PE9. I also would have liked seeing straps for the sides of the ejection seat back included, but this would be a personal preference.

In conclusion, I would highly recommend this set to anyone wanting to add some realistic looking seatbelts to their 1/48 scale F-14A ejection seats. Eduard recommends the use of superglue to attach the photoetch items, but I instead used G.S. Hypotube cement to attach the PE items to the belts, and to attach the assembled belts to the seat. I would recommend this set to model builders who have experience with small photoetch items, otherwise a set like this could be challenging.

I would like to thank the folks at Eduard for graciously providing these F-14A seatbelts to the IPMS-USA for review and to Dave Morrissette for allowing me to receive this set. I would also send kudos out to the assistants in the Review Corps for the great job they do in keeping the Corps running strong and as always, my appreciation to anyone who takes the time to read my comments.

Seatbelts in Place
Previous Next