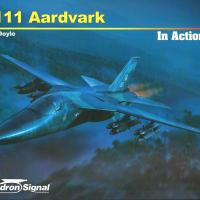 David Doyle’s latest book continues to expand Squadron Signal’s monograph series that initiated back in 1971. This is a completely updated and expanded edition over Squadron’s previous editions, including their 1984 edition, Aircraft In Action SS0035 by Lou Drendel, Squadron’s 2008 Walk Around SS5557 by Ken Neubeck; and Squadron’s 2019 edition Aircraft in Action SS10265 by David Doyle.

Squadron / Squadron Signal is back in business again after bankruptcy in mid-2019 and are now based out of Ellijay, Georgia. Their web page was re-activated in January 2022 for plastic kits. Brandon Lowe re-acquired the publishing arm and were able to publish their first new Squadron Signal book on May 11, 2022, with a new In Action book on the F/A-18 Hornet & Super Hornet by David Doyle. This was quickly followed by additional books by David Doyle, including: Squadron In Action F-14 Tomcat; Squadron Detail in Action B-25 Mitchell, and of course the subject of this review: F-111 Aardvark.

After many years of being published in enthusiast publications focused on military vehicle restorations, David Doyle ‘graduated’ to full-fledged books in 2003. His first book was a hefty 512-page history of US military vehicles. He has now had more than 100 books published in military vehicles, aviation, and naval topics. David and his wife Denise have amassed a collection of ten Vietnam era military vehicles that still displays at shows. In June 2015, was honored with the Military Vehicle Preservation Association’s Bart Vanderveen Award, given in recognition of "...the individual who has contributed the most to the historic preservation of military vehicles worldwide."

This book expands Squadron’s previous standard 80-page version format and it runs 88 pages packed with large, clear photographs. The front and rear covers feature gorgeous color illustrations by artist Piotr Forkasiewicz. The front cover depicts F-111A, call sign “Whaler 57”, from the 429th Tactical Fighter Squadron, 474th Tactical Fighter Wing on a combat mission. She was lost on November 7, 1972, with both crewmen perishing in the crash. The rear cover portrays F-111F, call sign “Remit 31”, from the 48th Tactical Fighter Wing. She is depicted launching a missile on the Al Azziziyah Barracks Compound in Libya on April 15, 1986. I counted 240 well-captioned photographs; 190 in color and 50 in black and white. Nine color side profiles are also included along with a 3-view line drawing by Melinda Turnage.

The General Dynamics F-111 Aardvark was the result of the Secretary of Defense, Robert McNamara, involvement in trying to force the USAF and USN to develop a single aircraft that would meet the needs of both services. Originally known as the TFX (Tactical Fighter Experimental), Robert McNamara ordered the development to initiate in June 1961. The evaluation team in the end selected a Boeing design, but were over-ruled by Robert McNamara when he selected the General Dynamics proposal. The F-111A first flight was achieved at Carswell Air Force Base in Fort Worth, Texas. on December 21, 1964. Flight testing battled compressor surge and stall issues that were dealt with by redesigning the intakes. The US Navy finally cancelled the F-111B, that they never wanted, in 1968 and the further development of the F-111 was conducted by the US Air Force. The General Dynamics F-111 was the world’s first production swing wing that ultimately saw 563 aircraft built.

David Doyle kicks off with an Introduction consisting of a few pages of text, then it is off to the well captioned photographs. The Aardvark variants are presented in order through Page 44. The rest of this monograph is then focused on the F-111 in service. Page 12 shows off some of the very early F-111A Aardvarks that were research, development, test & evaluation aircraft (RDT&E). Many of these early airframes did not have the crew capsule installed and relied on individual crew member ejection seats. Notably, one can see the second F-111A in the lower right color photograph in unpainted metal finish. Another RDT&E F-111A is depicted in Melinda Turnage color side profile, the 13th pre-production F-111A. This airframe was utilized in a joint USAF / NASA program evaluating a supercritical wing for Transonic Aircraft Technology (TACT) testing. The two color photographs on the page bottom highlight the Triple Plow II intakes.

The load that the F-111A could carry is displayed on Page 51 with bombs loaded on all eight pylons. Its interesting that only the two inner pylons on each wing could pivot to stay aligned with the fuselage and the outer pylons would not pivot. The Aardvark’s Southeast Asia camouflage I depicted on Page 69 as a F-111D taking on fuel from a McDonnell Douglas KC-10A Extender at Edwards AFB in April 1982. 380th Bombardment Wing FB-111As are shown at the top of the Page 79 in two different camouflage schemes: Southeast Asia and Dark Green and Gray. The color photograph at the bottom of the page shows off three camouflage schemes. The closest is a 428th Tactical Fighter Squadron F-111F in all grey that replaced the Southeast Asia paint scheme seen on the next F-111D with the 27th Operations Group. This F-111D has a brightly covered fin tip infra-red warning receiver with red, black, yellow, and light grey colors. An EF-111A Raven from the 430th Electric Combat Squadron in blue-grey over light grey is followed by an all grey 524th Tactical Fighter Squadron F-111.

The Table of Contents is as follows:

This is a gorgeous soft-bound book and is well worth the money whether you are an aviation historian or a modeler (or both). David Doyle provides lots of clear photographs with detailed captions. Most variants of the General Dynamics F-111 are available in 1/144, 1/72, and 1/48 scales. There are also a plethora of accessories available and with 3-D printing, there will be even more details / conversions available. If you own any of the previous releases in the In Action series, you know what you are getting. If this is your initial entry into this series, you will be quite pleased.

My thanks to David Doyle Books at (David Doyle) and IPMS/USA for the chance to review this great book.