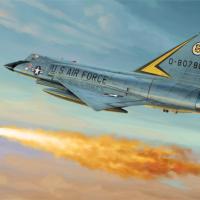 As the follow-on to the F-102 Delta Dagger and a beneficiary of the area rule applied to later models of that predecessor aircraft, the F-106 was known as the “ultimate interceptor”. Serving almost 30 years in the USAF, various ANG units, and as a NASA research platform, the F-106A saw a production run of 277 aircraft. Equipped with a Hughes MA-1 integrated fire control system designed to link with ground-based SAGE (Semi-Automatic Ground Environment) equipment, the Dart was fitted out with four AIM-4 Falcon air to air missiles as well as one of several variants of nuclear-tipped rockets, all designed to take out an incoming Soviet heavy bomber. All weaponry was carried internally in a large weapons bay.

Trumpeter’s rendition of the hot rod Delta Dart is all new tooling consisting of 5 crisply molded frets in light gray, medium soft plastic, two sprues of clear plastic (canopy, windshield, landing lights, beacon) and a colorful decal sheet offering three sets of markings; a 460th FIS bird from 1972, an early serial number Dart that was later converted to a QF-106 target drone, and the variant I built, a 171st FIS aircraft serving with the Michigan ANG at Selfridge, ca 1977.

Construction was straightforward. Very little cleanup was required, mold lines are minimal and the fit is exquisite – some parts were literally press fit. The exception to this statement (and let’s allow plenty of room for operator error) was the fit-up of the engine inlet/boundary layer plate to the fuselage, and most troublesome, the wing assembly. Trumpeter molded the entire upper wing as one piece and has you attach the two lower inboard wing sections to that molding in Step 9. This results in a large joint, much of which follows natural panel lines on the aircraft, except for one long fore-and-aft joint (which is cleverly designed to fit under the external fuel tanks and be less obvious). However, there is no positive surface for inboard lower wing panel to sit on at this joint (which is puzzling, it doesn’t appear difficult to have molded one). The result is a “floating” joint that required a lot of work to fair in after assembly. If I built this kit again I’d pay a lot of attention to getting these two surfaces flush, because I spent a lot of time scraping the high spots trying to mate them up, with less than perfect results. This joint runs through a lot of access panels on the lower wing, and I spent some time rescribing these. The good news? First of all, it’s on the bottom. Second, having no joints to deal with on the upper wing almost makes up for the fiddly lower joint. In fact, I used almost no filler anywhere on the aircraft with the exception of the inlet and lower wing joint issues described above.

I was going to button up the weapons bay (Trumpeter provides your choice of closed or open bay doors) but I couldn’t resist all that colorful weaponry. Frankly, detailing and assembling the weapons takes about as long as building the rest of the model, but I think it pays off in the long run. Aligning the four AIM-4 Falcons, two of which attach to a launch tray was challenging. There really isn’t any positive location feature so I resorted to a favorite trick – slow-setting white glue and some creative jigging, along with small adjustments as the glue set up. It’s still not perfect, but I’m fairly satisfied with the results.

The ejection seat didn’t fit down into the cockpit well after I assembled it, but I found that by removing part D5 (which isn’t visible anyway) I was able to encourage it into position.

One other area where I departed from instructions was in Step 3, assembly of the (nicely detailed) nose landing gear well. Trumpeter would have you install the nose gear in place at this early stage and work around the fragile part for the rest of the build. I elected to install it towards the end of construction, which meant that I had to slice off the two locating pins, sand a flat onto the front of the trunnion, and glue it directly to the rear wall of the gear well – which worked just fine. As a side note, the landing gear is exquisite – there are 6 parts to each main gear assembly. Pay careful attention to the assembly diagrams in Step 11, it’s easy to misorient one or more parts (don’t ask….).

I used US Interior Green for all weapons bay and wheel well surfaces, except the interior of the nose wheel door, which is white. I picked out details with various Metalizer colors and did a light wash, but sparingly, as these aircraft were typically very well maintained. After major assembly was completed, I masked the cockpit, inlet, bay areas, and nose wheel well and primed the model with Tamiya Gray spray primer. I addressed a few small gaps and shot a color coat of Vallejo Light Gray acrylic, which is a fine match for ADC Gray (FS16473). A couple of coats of Glosscote over the top prepared the Dart for decaling. Here’s where the fun began. These decals are tenacious – once on the model, they don’t want to move. I had to float them in place with water. I had some real issues with the long, thin decals (for example, the “Six Pack” logo and stripes on the fuel tanks). These shattered into multiple pieces and I had to do reconstructive surgery to line up half a dozen segments of what once was a one-piece decal. Not fun.

Solvaset helped to conform the decals – lots of decals, including 6 on each of the Falcon missiles. After the model dried, I tried something new – I loaded my airbrush with a very dilute solution of water and dish detergent and “power washed” the model before the final gloss coat. This worked well and I may try it again.

I shot another coat of gloss over the model and attached all the remaining fiddly bits, using Future as an adhesive.

Summary: Trumpeter’s 1/l72 Delta Dart features fine molding, a near-perfect fit, and great details. The lower to upper wing joint is the weak part of the build. The decals are challenging and finicky. But I am pleased with the final result. One last comment – this is a big airplane!

My thanks to Trumpeter and MegaHobby for the opportunity to review this kit.