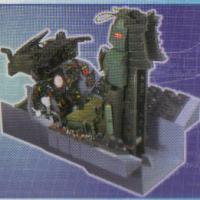 “The missile with a man in it!” is the way the F-104 Starfighter by Lockheed was described. Mach 2 speed and very high altitude was just a couple of the remarkable aircraft’s abilities. Even after marking it’s 50th anniversary in February 2004, there are a few left with the Italian air forces. They will all be retired by the end of 2004.

The Italeri’s re-release of the ex-ESCI kit is a very fitting tribute to this fine machine. Injection molded in light gray, clear and black the parts all show great detail and minimal flash. A relatively low parts count, 124, would fool you into thinking this is an easy kit. In assembly yes but in painting no. Most of the detail will have to be painted to bring out the complexity of the ‘front office’. All detail is crisply molded including the texture of the seat. There are no clear pieces for the instruments so some Kristal Kleer will need to be used for the lenses. The only clear parts are for the HUD, helmet visor and radar scope. What is a bit confusing is that all of the clear pieces are smoke tinted. That is OK for the visor but not for the HUD or radar parts. The lenses for the HUD and radar could be redone with the Kristal Kleer and the HUD screen with sheet clear plastic.

The seat harnesses are made of a stiff self-adhesive vinyl material. They don’t lay right and they stick to the buckles and adjusters while assembling them. I suggest using lead foil or narrow strips of masking tape for the harnesses. Decals are used for all the instruments and data placards. They settle well with Solvaset. All of the paint color call outs seem to be right on. The instructions are easy to follow and point out locations clearly.

This is a great kit and will look good along with the other Italeri release of the F-16 cockpit. Also can be used along side of a full model of the F-104 Starfighter. This model will transport you into the driver’s seat of one of the greatest warplanes ever built! Full afterburner now!!!

Our thanks to Italeri for the sample.