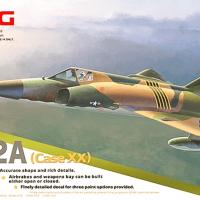 This TreadHead was recently persuaded to volunteer to review a Sci-Fi project and an Airplane! Not just any airplane mind you, but a 1/72 airplane… way outside my comfort zone! However, in every cloud there is always a silver lining, and that statement could not be truer than with this Meng F-102A.

As I looked over the IPMS/USA Reviewer Corps list in need of being built , I saw this Meng kit, and I assumed (we all know about doing that) this was one of the two earlier versions of The F-102A, featuring the Case X wings, that Meng produces. Yep, I was wrong! The two earlier versions are kits DS-003 and DS-003s, which are identical kits with different markings, the latter of the two a limited edition with markings for the bird flown by former President George W. Bush. The model I received to review is a newer kit with Case XX wings. The difference between the Case X and Case XX wings was that the initial planes had upswept wings (Case X) while the later versions had down swept wings (Case XX). An even cooler part of this kit is that my Father may have actually pulled camera equipment out of this bird, as he was in Thailand with the 509th while the Deuces were there.

The kit contains over 79 parts on six sprues. All the miniature parts are molded in grey styrene with a smaller clear sprue containing five parts. The beautiful decal sheet contains marking for three different birds. One is for the 509th FIS in Thailand, and the other two are Air National Guard birds from the 196th FIS (California) and 179th FIS (Minnesota). Also included is a really nice 15-page assembly and painting guide. The only listed paint options are for Vallejo acrylics. The names of the colors are called out, and I will be using my best guess with Model Master Enamel options. Every sprue comes packed in its own bag, which I love, even though it is probably not environmentally sound. All the parts are flash free, and I saw very few, if any, ejector pin marks that might come back to haunt me. Several options are included in the kit. The canopy, weapons bay, and wheels wells can all be displayed opened or closed. The weapons bay armament consists of two different versions of the AIM-4 Falcon. You get six of each. The standard load was three AIM-4s and three AIM-4Bs. However, there was also the AIM-26 Nuclear Falcon. These were in theater and, when required, were slung under the center rails. These missiles are not included in the kit, but would be a nice option to consider. This is the option I am going to represent. I found some AIM-26s from a company called Maistro out of Germany.

I have no idea how model builders work in 1/72 scale. I started by painting the interior cockpit parts. The seat and the couple boxes on the sidewalls were easy. I then tried to paint the dials. Even using a free hands magnifier, I could not make the dials look right! I would have gladly LOVED a decal! Guess what? Meng includes one with dial face details as well! With some Future on the face, it applied beautifully. Nothing more than a dry brush of steel was added to the side cockpit consoles. Lots of switches and raised items here but was not going to try to pick them all out. I did paint the ejector seat handles yellow for some color, but I don’t think anyone will notice. The seat does not come with a pilot figure, any harness straps or buckles.

Assembly continued fine until the wings were to be fixed. I followed the instructions and was now faced with a large wing to fuselage gap. If you attached the lower wing to the fuselage and then attach the upper wings to the lower, I am almost positive this error can be avoided. You might end up having to sand the outer edges down slightly before attaching the down swept wing tips, but that will be easier than attempting to fix the large gap. This issue put me in a foul mood, and I concentrated more time and effort on assembling the Meng Achzarit kit, among others, while this one just sat on my table.

The need to get the review done eventually spurred me into action. Mrs. TreadHead and I took a road trip up to Skyway Models to get some Tenax-7, so I could see if the wing could be manhandle into submission. The new plan was to finish this in an “in flight” configuration and use the 196th FIS out of California markings. This would also ease painting as it’s in an all Air Superiority Gray scheme. While getting the Tenax, I picked up another Deuce to eventually build for my Dad the way I want to.

The “in flight” configuration required building the wheels and canopy closed, but this lead to its own problems. There are noticeable gaps and fit issues as you attempt this. These, of course, will not be noticeable if your plan is for a “wheels down” model. The canopy had to be forced down to make it sit. The gap is huge between the windscreen and body. There are no raised lines on either canopy parts, so I used scotch tape to mask the clear parts and freehand cut. The plane was fired with Model Master Medium Gray and set aside to dry. The black nose and anti-glare panels were masked off and painted as well. After this was dry, I shot three coats of Future and waited to apply the decals.

Decal application went well, except they did not snuggle down as nicely as other decals. As several of the larger ones are applied over panel lines you may need to run a razor over them to help them into the crevices better. The tail flashes went on well, but when I attempted to wrap the right one over the left, it actually broke instead of bending. I thought it was going to be a problem to match the color, but I had an artist pen that appears to have been a perfect match. The tank decals threw me off. The plane is said to belong to the 196th FIS. However the tank is marked as 163. I don’t know Air Force units, but one would think the tank would say 196. Call me loopy, but it just makes sense.

After applying all the decals and allowing them to dry, the plane was given a coat of flat and the metallic paints were applied to the required areas along with the running light colors. The pitot tube could definitely use a resin or metal replacement. It is attached to the sprue by three points and all need to be removed. This made for an out-of-round and warped tube. I painted the tail hook and pitot tube white. They are supposed to have red bands around both, and I was not going to attempt that. Decals, good masking, or a steady hand will probably win the day for you here.

I learned several things while doing this build. Even newer made kits are far from being perfect. I am not good with 1/72 scale. The wing issue was a real let down to me, and I will pay extreme attention to it during my second build. This model is definitely designed to be built wheels down and canopy opened.

I would like to thank Meng Model for releasing and providing this kit for review. I want to thank Dave and IPMS/USA for allowing me to “work outside my comfort zone” and build something other than a tank, and be able to show it off on the review site. Go out there and pick up one of these new DEUCES, enjoy the build and let me see how you did!