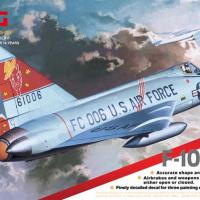 For those who have been longing to add an early F-102A to their collection, or just a more modern release of a Delta Dagger in 1/72 scale, I would highly recommend gazing in the direction of this new release by Meng. The kit goes together well with only a few minor seams needing a light application of your filler of choice, and will not challenge modelers with some experience in dealing with small parts. Options for this kit include open or closed canopy as well as weapons and landing gear bays, and extended and retracted missile rails. There are also AIM-4C and D Falcon missiles to select from when arming your plane. This was my first experience with a kit by the newcomer Meng, and I will have no hesitation in purchasing their kits in the future.

The Convair F-102 design was based upon knowledge gained from the delta-winged XF-92, built by the same company, and although meant to be an interim interceptor, saw a production run of 889 aircraft. The fuselage was made to resemble a “Coke bottle” as part of the area rule design, which assisted the plane in reaching speeds in excess of Mach 1. The Case X, or case ten, refers to the wing design, as the initial F-102A airframes had Case X wings identifiable as having slightly upturned ends that were squared off, whereas the latter Case XX (case twenty) had downturned ends that were rounded. The Case X wings were installed on aircraft with serial numbers from 53-1790 to 56-1316, while serial numbers 56-1317 through 57-0909 had the Case XX wings.

Upon opening this kit, the modeler will find an even one hundred parts distributed across six sprues, ninety-five of them molded in a soft, smooth, light gray plastic, while the remaining five are on a single clear sprue (these include lights for each of the landing gear). The decal sheet contains markings for three different aircraft, two representing Fighter Interceptor Squadrons in 1958 and 1962 with Aircraft Gray paint schemes, while the third marking is for a squadron that served in Viet Nam in 1970 with a Southeast Asia paint scheme. The instructions are wonderfully printed in a thirteen-page color booklet with the painting guide pages folding out. This is the third kit released in the Dimorphodon Series (Meng uses dinosaur names for their different series), and I have seen advertisements that the next kit is an F-102A with markings for a plane flown by past President George W. Bush.

As I mentioned at the start of this review, the kit went together very well, as the only seams that I had to deal with were on the fuselage and air intakes; there is also one on the inside of the engine exhaust that I had no good ideas on how to solve. I noted a heavy mold release coating, especially on the larger parts, so I actually cleaned this kit with dishwashing soap and water, and then later with Floquil Plastic Prep, but still had some paint adhesion issues. My advice here is to ensure that the plastic is truly clean before applying your paint, especially if using acrylics.

The markings in the directions show a red and white stripe pattern for the pitot tube, but it was in reality a barber pole design with the stripes placed at an angle. In my references, the number of stripes, and therefore their widths, varied. I came up with the idea of using red tape over white paint to create my design. I thought of red decal film cut to width as well, but knew I would have more flexibility with the tape. I was not going to attempt to hold the pattern using a paintbrush.

I opted to use the markings provided for a plane that served in 1962 with the 431st Fighter Interceptor Squadron, and I only used the AIM-4C missiles in the weapons bay as the AIM-4D was not introduced until 1963. I wanted to display both the lowered and raised missile launch rails, so I used the raised assemblies in the aft section of the bay. I will mention that the detail on the missiles is lacking the infrared nose demarcation on both variants, so you just have to use your reference(s) and a paintbrush.

To finish my model, I used Model Master Acryl colors (Aircraft Gray, Aircraft Interior Black, Gloss Black, Insignia Red, Interior Green, Chrome Yellow, and Semi-Gloss White) with the exception of the engine exhaust and metal areas, which are Model Master Metalizer colors (Steel, Stainless Steel, and Exhaust). I also put some Vallejo Dark Rubber and Khaki to use, as well as Model Master Lacquer Silver, and after decaling the plane, I used Model Master Metalizer Sealer as the final coat. The decals went on just fine using only Micro Set, but I still coated them with Micro Sol to get them to lie down better over the panel lines.

As far as my hits of this kit are concerned, the instructions really blew me away with how well they were printed, and they include a brief history of the plane which many manufacturers do not include. The moldings were all clean with only minimal flash removal being necessary, and the panel lines and rivets were all nicely done. I would also mention that with the wingtips being molded separately, I could imagine that a Case XX variant may be coming down the road. The clear parts were among the best that I have worked with for clarity and detail, and molding the clear landing gear lights allows one to paint them silver, then interior green, to get a “real” light appearance. I also liked the detail of the folding fin rocket storage in the forward edges of the weapons bay doors.

Concerning my misses of this kit, my first was with the fit of the exhaust halves, as there is a seam running along the top and bottom of the assembly, and it being ribbed at the far end, I did not know how to fill and then sand the area. I also had an issue with the mating of the right wing to the fuselage, as the joint covered up the detail of the rivets on the fuselage for this connection. Although easily corrected, I found the red stripes that indicate the turbojet blade area on the fuselage were all about 1/8 inch too long, and the red and white stripes decal across the top of the fuselage was about 1/16 inch too long. The mold release that I mentioned earlier is not so much a miss as a heads-up to others, as it does clean off, and the plastic will paint up just fine once removed. Not so much a miss, but just feedback is that the folks at Meng seem to be in need of someone to help with their grammar and proofreading. I would certainly be glad to offer my services. My example with this kit is that Interior Green is spelled out as “Interio Green” throughout the directions, but I have read an advertisement in a magazine that could have used some help as well.

In conclusion, I would highly recommend this kit for anyone wanting to add the F-102A with Case X wings to their collection. The kit builds up with relative ease for any experienced modeler. I would like to offer thank the folks at Stevens International for providing this fine kit to the IPMS-USA to review, thanks to Steve Collins and the rest of the crew who keep the Review Corps running along, and as always, thanks to all who take the time to read my comments.