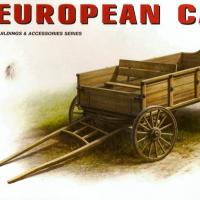 Kit includes parts to build a four-wheeled, wagon-style, horse-drawn farm cart. The box art is nicely done, but is the only painting guide for the kit. The back panel of the box includes a sprue map and exploded-view assembly instructions. No decals are included.

The kit includes two sets of identical sprues, with a total of 52 parts molded in light gray soft plastic, including bottom, sides, front and back panels of wagon body, suspension pieces including front and rear axles, hitching beams and turning mechanisms for front axle, as well as four spoked wheels, seat bottom and backrest, and various hardware. There is no visible flash on any of the parts, but mold separation lines are present on all of the parts. The wood sections are nicely represented, with fine grain molded into the surfaces.

Building this model is straight-forward, following the instruction diagrams to complete the main subassemblies for painting. Since I wanted the wagon to look old and used, but not dramatically deteriorated, I chose to paint the aged wood in shades of gray. I chose Model Master Euro I Gray enamel for the base color. Removing the mold lines was relatively easy, but it was somewhat tedious cleaning up the mold lines on both sides of the 56 spokes on the wheels. The fit of the parts was nice and tight in most areas, and in fact, the wheels and the front axle/body rotating joint are actually fitted but not glued. The wooden sections were painted with the base color, then repeatedly drybrushed with lightened shades to show age and wear. The metal hardware was painted with Model Master Semi-Gloss Black. A wash of Testors Rust was used around the hardware to simulate older darkened rust, and Rust was also drybrushed on the wheel’s metal rims where they would have contacted the ground and road surfaces. To show newer rust, I tried a technique I’d never used before. I had some light rust pigments, which I mixed with Model Master Clear Flat Acryl to make a paste-like slurry mixture. I then dabbed that onto the metal surfaces to simulate the fresh surface rust that would have likely formed there. I was pleased with the results, and somewhat pleasantly surprised, as it actually did look like fresh surface rust.

This is a really nice little kit, which would be a perfect centerpiece for a diorama or vignette. It is simple enough for a beginner to build, but more experienced modelers will be able to create their own miniature masterpieces. I’ve got a diorama in mind, and one of these days, when I finally have time to build it, this little gem would be an excellent addition. I would highly recommend this kit.

I would like to express my sincere gratitude to Model Rectifier Corporation and IPMS/USA for allowing me to do this review.