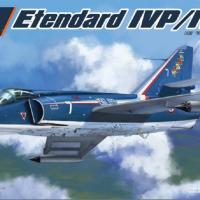 Kitty Hawk Models has already released a 1/48th scale kit of the French Super Etendard. They are now gracing the shelves of your local hobby shop with an earlier version of that aircraft: the Dassault Etendard IVP/IVM. This model represents the maritime strike (IVM) or photo reconnaissance (IVP) version of the aircraft.

Etendard is the French word for standard or banner. For some historical perspective on the Dassault Etendard, I'd refer you to Air Vectors website. Air Vectors has a nice history of the type from the Etendard II through the Super Etendard, for your edification.

Upon opening the box you will encounter five sprues of light gray parts and a sprue of clear bits for the canopy, clearance/anti-collision lights and photo-recon camera windows. There is a fret of photo etch parts for some of the finer details. Among those photo etch parts are seat belts, speed brake detail, flame holder for the Atar 8B engine, and wing spoilers.

The decal sheet has markings for five aircraft, one of which is for White 118. White 118 was the commemorative aircraft for the final flight ceremony of this mark with the French Navy. There is also a small decal sheet for the instrument panels and side consoles in the cockpit.

One note about the parts. My review copy included two sprues that contain all the weapons/underwing stores and appropriate pylons deployed on the prototype aircraft. The list is pretty extensive and you will definitely have some extra bits left over for your spare parts stash. You may choose from the following:

Also included are some weapons and missiles that were not typically carried by the Etendard IVP/IVM. Among them is an AM-39 Exocet anti-ship missile and two versions (400kg/1000kg) of a bombe guidée laser (BGL). Of course, if you go that route, a laser designator pod is included. Extra goodies are always appreciated.

The twenty-five page instruction booklet is well laid out with illustrations for the thirty seven assembly steps. It should be noted that ten of those steps are for the under wing stores and weapons and ten pages make up the color illustration for the various markings options. This won't be a daunting build.

The last two pages of the assembly booklet have an illustration of one of the five markings options included with the kit. The other four schemes represented in the kit are shown in a removable centerfold section. Is that the J. Geils Band I hear playing in the distance?

All of the marking options are presented as four view color illustrations and include:

As you move through construction of the Etendard IVP/IVM, you will need to make a few decisions.

The first one you will encounter is whether or not to depict the refueling probe in an extended position or not. Step four outlines the nose cone section for the reconnaissance version(the camera windows really give it away) while step five showcases the parts needed for the strike version and an extended refueling probe. It would be possible for you to model the refueling probe retracted on the strike version of this aircraft but that will take some careful fitting of parts. But it is doeable. And don't forget to add some weight to the nose section.

The cockpit presents some choices as well. There are two different forward instrument panels included. Nothing in the instructions indicates which is which for the IVP or IVM versions. The recommended color in the instructions for the cockpit is flat black so I chose the one with more detail. Although the instruments and switches are molded onto all the cockpit parts, Kitty Hawk does give you decals to ease the pesky step of painting those details yourself.

Another involves the flight surfaces (ailerons, flaps, slats, etc.). Each of those separately molded parts are poseable. You may need to shave off the locating tabs on each to make that happen. The two wings tips(part #A 53/# A54) are molded as complete, separate parts. This feature will allow you to model your Etendard with wingtips in a stowed or raised position. Kitty Hawk Models does pack a lot of nifty features into this kit.

This model is marketed as the Etendard IVP/IVM but there is precious little in the instructions to note which specific part does or does not make it one or the other. Although it is probably safe to assume that if you delete the photo reconnaissance pod (step twenty-four) and load it up with weapons you'll have the strike version of this aircraft. Photo reconnaissance aircraft are typically not armed. Doing away with a weapons load might also go a long way toward convincing the casual viewer that they are ooh and aahing over a recon aircraft. Check your references!

If you do decide to load your model up with beaucoup ordonnance be sure and drill out the mounting holes in the lower wings (part #B23/#B24) and the lower fuselage (part #A55). Speaking of part

#A55, this is a section of the lower fuselage that includes some detail for the two 30mm cannons. But, no cannons?

As you proceed thorough construction you will notice that it might be prudent to leave some parts off your model until painting is completed. Among them are the various anti-collision/marker lamps, antenna, and air scoops. There are a bunch. The anti-collision/marker lamps parts are all molded in clear styrene and it might be wiser to wait until everything is buttoned up before adding them to the completed model.

Another protrusion that concerned me was part #A35. This is the pitot tube on the vertical stabilizer.

I left that part off until the end of the build, fearing that I might snap it off during construction,

There are some parts that represent stabilizing strakes/fences on the vertical stabilizer. I forgot to drill out the mounting holes on parts # C65 and # C66 before gluing those pieces together so I didn't use them on my build. In my defense, there are some photographs of the actual aircraft without these.

Along with the stabilizing strakes on the vertical stabilizer, there is one on the lower portion of the fuselage, forward of the landing gear. Kitty Hawk provides two different versions of this feature. The only indication of which to use is provided by illustration in the assembly instructions. Pay attention to the illustrations in the instructions.

The canopy is molded in two clear parts and you have the option of showing it open or closed. The canopy retraction piston (part #D90) is included but you install that in step one. You will need to choose which way you wish to go rather early in the build. Just be careful that you don't break that part during your build.

I should have mentioned this earlier, but do familiarize yourself thoroughly with the assembly instructions and any reference material you can find before you begin assembly.

Assembly of the kit is broken down into sub-assemblies: cockpit, forward landing gear, forward fuselage, center fuselage, wings, engine, vertical/horizontal stabilizer tail section, main landing gear, and then, all those weapons. None of these steps present many fit issues. There is some flash on a few of the parts, but it is minimal. Just take you time, line things up properly and all will be right with the world. Or in this case, your Etendard.

There is more than enough molded detail (cockpit, speed brakes, wheel wells, etc.) in this kit with a plethora of antenna, sensors, air scoops, etc included as separate parts. Even the finicky will enjoy this kit. Kitty Hawk Models even includes an auxiliary power attachment portal on the fuselage. If you choose to show your model in flight you will need to leave off the interior parts for the speed brakes and main landing gear doors to get them to fit properly. The boarding ladder is a nice touch as well.

The engineering of the parts has been done in such a way as to hide most, if not all, of the seam lines.

I managed to assemble my Etendard without the use of any putty.

Kitty Hawk Models Etendard IVP/IVM comes with five different schemes, a multitude of optional parts, and a weapons selection beyond reproach. Assembly isn't daunting, although I would not recommend this kit for the first-time builder.

Watch the shelves of your favorite, local hobby shop and add this new standard (Etendard) to your collection.

My thanks to Kitty Hawk Models for this review copy.