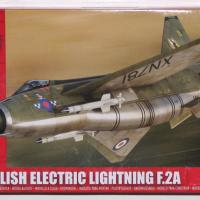 Entering RAF squadron service in 1960, the Lightning represented a quantum leap in capability and performance over the RAF’s previous interceptor jets, offering Mach 2+ performance as well as a phenomenal rate of climb. Until its retirement in the 1980s, the Lightning had few rivals for outright speed and climbing ability, however it did have some shortcomings, most notably its lack of range as well as its limited armament of just two air to air missiles. The F3 Lightning introduced an enlarged ventral tank with later versions being equipped with over wing tanks, improving the range of the lightning further. These versions deleted the nose guns of the earlier variants, thus reducing the ability of the Lightning pilots to get in close with their opponents. They also did nothing to overcome its missile deficiency, with the Lightning still having to rely on just two missiles.

The kit: Upon opening the box you will find 4 sprues of soft, light grey plastic, 1 clear sprue, a decal sheet, a 12 page instruction book and an instruction sheet for the placing of the stencils. The plastic is flash free and very crisply molded but in my kit the fuselage had a grainy texture to it (light sanding cures this) and there are also a few pin marks that need to be cleaned up The clear canopy parts were clear and thinner than I was used to with Airfix. The comprehensive decal sheet was printed in register with a matte finish and if you like stencils, you’re going to love this sheet!

It all begins with the cockpit and intake and steps 1-8 take care of this section. The tub is without any detail but you are given decals for the consoles along with the control panel. The seat is a 4 piece assembly and is not too bad for a kit of this level. The intake tunnel has the intake ring molded on so painting this is a bit of a trick but not too bad. I added a small fishing weight to the radar cone and another one just behind the cone to make sure I didn’t have a tail sitter. I did leave the cone off until later in the build though just to make painting the chrome ring easier. You do have the fan blades molded on to piece 56 but after constructing this, you can’t really see it due to the cone and the curves of the intake trunk.

Steps 9-14 deal with the exhaust & fuselage assembly. The exhaust & nozzles look very nice and you even get afterburner nozzles molded into the end piece (53). I need a flashlight and glasses to see them after construction, but they are there! The fuselage went together well but I decided to leave the nozzles off until I had painted the fuselage…..That was a mistake. I had a small battle with it to get it to fit just right, lesson learned.

Steps 15-20 are for the construction and attachment of the wings and stabilizers. The wings are a 3 piece assembly as you can pose the ailerons how you wish. I decided to leave the horizontal stabilizers off until after finishing with the decals so as not to damage them. One item of note on step 16 you need to open the holes on piece A2 if you want to add the refueling probe.

Next up in steps 21-23 are where you decide if you want to show the gun troughs or have them covered. You are given pieces for both options and I decided to have all guns (There is a problem with this….more later). The pieces for the gun troughs (C1-C4) are shown in the instructions to be placed on after the fuselage is together, I did this and they would not sit flush. I have a second kit and tested the fit on the fuselage halves before being assembled and they fit perfect. So in my case they are hitting the intake trunk first and I’m not sure if it’s something I did or if it’s the kit, you may want to watch out for this. The fins on the bottom of the fuselage are to be added now but, as with the horizontal stabilizers, waited till the decals were on before adding these.

Steps 24-31 are dedicated to the landing gear. You have a choice of extended or retracted and are supplied with single piece gear doors (B25 & C12, 13) for the retracted version. Both the main and nose gear have a 3 piece door for the extended versions and the fit well as did the struts. The instructions are very well done and helped even more by showing the angle the struts and wheel cover are supposed to be.

Steps 32-38 are for the final small bits such as speed brakes (can be posed open or closed), missiles, refueling probe, pitot tube, gun sight & canopy. Now, on to the problem with going all guns. I did not want to use the missiles, BUT, piece that holds the missile has a tab that fits into a hole on the fuselage and you are going to have to fill that. I had not noticed that before I started and had already painted and decaled when I noticed. I had just figured since they supplied covers for the gun troughs, optional pieces for the gear and a FOD cover, they would have supplied a piece for that hole….that’s my story and I’m sticking to it! So if you are not going to use the missiles…fill in the hole before painting!

You are given marking options for two aircraft, one from No. 19 Squadron (Green over Natural metal) and one from No. 92 Squadron (Natural metal finish). I chose the green and would you believe it, missed it by a mile. I used Tamiya Deep Green and it’s a lot too bright…sigh. For the underside I used Testors Metalizer Aluminum Plate (Buffing) and am real happy with that choice. Alclad Chrome was used for the intake ring and looks very nice. For the exhaust nozzles I used Alclad Jet Exhaust and for the outer coverings Testors Metalizer Burnt Metal (Buffing) and Magnesium (Buffing). The decals went on without a problem and needed just a little help from Solvaset to set down.

What a fantastic kit! As far as I’m concerned Airfix hit another home run and I recommend this kit to just about anyone except maybe a true beginner.

I would like to thank Airfix for releasing this wonderful kit, Hornby America for providing it, the review corps for letting me build and for all of you for reading this review.