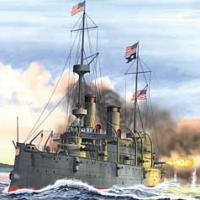 This is a reboxing of the old Revell kit, which I built many years ago, only with quite a number of goodies included to bring it up to modern standards. There are such a number of goodies that, in order to get the word out as quickly as possible, this just had to be a two-part review.

Included in the Premium Edition box are 2 sprues of plastic, 2 halves of the hull, and a plastic display stand, all representing the older Revell kit. The upgrades consist of a wooden display stand and hardware (6 metal parts), two photo-etched (PE) frets and a photo-etched label for the base, 28 turned brass replacement barrels for all the 8”, 5”, and 6-pounder guns, 5 cast resin parts, 4 white metal parts, and 13 sections of laser-etched wooden deck. There is also a flag sheet. The instructions are in a color booklet form, with a decent color guide, a short history of the Battle of Manila Bay, and a guide for the standing and running rigging. Most impressive, though, are a series of 16 pictures towards the back which show very helpful views of a completed but unpainted model with all the photo-etch and resin and such in place.

There are three painting schemes illustrated, 1 for the battle and 2 for later versions up to late 1899. I chose the grey battle scheme, but the white hulls of the later versions are very attractive in a Great White Fleet sort of way.

Construction is from the keel up, just like in the real world. There is a lot of preparatory work required for the upgrades, and some of this work can be done while waiting for paint to dry or glue to set. I read completely through the instructions and became familiar with all the parts before I decided how to proceed.

Step one of the instructions is the base, hull, and hull-mounted accessories, i.e., screws, 10 hull-mounted 6-pounders, life rings, bilge keels, torpedo tubes, and rudder. There is much surgery to be done on the plastic, and I recommend doing all the cutting before doing any of the gluing.

The first thing I did was to finish-sand, stain and assemble the pine base to its hardware, and I encountered no problems. You will need to do some sanding, but the soft pine is easy to work with, and I wish I had done more sanding before staining. The photo shows the kit-supplied base with the wooden replacement, and the wooden base is well worth the extra effort. Note that the original base allowed for the ship’s name on both sides; I recommend attaching the PE name plate as the last step in assembly after completing the rigging to show off your ship’s best side.

While waiting for the stain to dry, I commenced cutting and grinding on the hull halves. I removed the raised pins from the 6-pounder sponsons, the life-line stanchions, molded-on life rings and ship’s crest, all to be replaced with PE. This is basic work, and must be done carefully to avoid spoiling the finished product, as the hull will be visible under the PE life ring cages. I also cut out the molded forward torpedo tube and cut the top post off the rudder as indicated. These were replaced with resin parts. Then I glued the halves together, removed the old plastic mounting stubs, and drilled the mounting holes as indicated in the instructions.

I do not recommend replacing the forward torpedo tube with the resin part. First, the surgery is extensive and delicate and, as careful as I was, I lost some rivet detail. Second, the resin replacement is attached to the casting plug by its face, by which I mean the torpedo tube door. You will have to file, reshape and rescribe the door detail. While the resin piece does have a more correct shape, the extra effort is not worth it in my opinion. There is a photo which shows my final result in place, and you can judge for yourself. The fit of the resin is quite good.

The after torpedo tube is not represented on the original kit, but it attaches to the completed hull easily. You will have to rescribe the door as indicated above. I made the cut to the rudder and do not believe the resin part improves the look of the kit. It’s a rather tough angle to cut on the plastic, and I think my cut is a little off as shown in the picture.

The ship’s screws are nice little castings that clean up quickly, and they have the correct shape, which the kit screws do not reproduce very well. The PE bilge keels give the kit a much improved appearance. I found that both the PE parts fit well to the port side, but neither fit on the starboard side. This must be due to an irregularity in the starboard hull half, but I got the thing on eventually. I left the screws in the fiddly bits pile to go onto the kit in the last stage.

Then I masked and painted the hull. The anti-fouling red (misspelled in the instructions!) was Krylon Fusion for Plastics red, as close a match as I could find. A light coat of Future went on to protect the finish. The hull color is Navy Grey, mixed from Model Master Panzer Grey lightened by craft acrylic white. I mixed enough in one batch for the superstructure as well.

I broke up the surgical monotony on the hull by removing all the 8”, 5”, and 6-pounder kit gun barrels and drilling out the mounts in between grinding and sanding sessions. The turned barrels are things of beauty and really dress up the kit. The instructions give the correct drill bit size, and I was surprised to find that drilling the smaller mounts was easier and faster than those for the 8” guns. Go figure. I had some filling to do on the 8”-ers but that is no problem and is well worth the effort. The pictures say it all.

When the hull was dry, I mounted the ship to the stand and put a dab of super glue onto the bolt heads to prevent them from turning too easily. Next, I installed the hull-mounted 6-pounders. The original kit was designed to make these free-moving, but this incarnation has PE sponson doors. The PE numbering can be confusing, but the illustrations make it clear how the doors go. There is only one option for the posing of the guns, fore-and-aft as opposed to directly abeam and, as I installed the doors, I made sure the guns were cemented in place. The photo shows this is a major improvement on the original kit, and the doors were surprisingly easy to shape using the punches in my punch and die set.

During this surgery and assembly, I also decided to see how the laser-etched deck would respond to staining. The answer was, very well. I used an acrylic stain in a teak shade, and the drying time was about 20 minutes. The original plastic deck pieces will need to be lightly sanded, and this will also take about 20 minutes for the large amidships portion and about the same for the fore and after sections.

While waiting for the paint to dry, I turned to step two, the amidships superstructure on the main deck. The large davits were originally designed to be movable, and I may pose a boat in the act of being lowered; it’s too soon to tell. The instructions indicate that it is optional to remove the webbing from the 5” casemate openings but, as the guns themselves are not very well detailed and there is no PE replacement for the webbing, I did not do this. I did do the recommended hollowing out of the upper level 6-pounder ports. These 4-piece, white metal, turned barrel and PE guns are a definite improvement over the kit parts and they should definitely be shown off. The hollowing out takes a bit of patience and a steady hand but, as the picture of the replacement gun shows, it should be worth it.

I have also started steps thirteen and fourteen, removing the molded-on detail from the stacks. This is much harder than I thought it would be, but the PE replacements look much better in the kit photos.

Looking ahead to the rigging instructions, I also took some lessons from my local club members and learned how to use my punch and die set. We’ll talk more about manufacturing blocks (pulleys to you landlubbers!) when part II comes along next month!

Many thanks go to Squadron Products for providing this kit, and for breathing new life into an old favorite, and to IPMS/USA for giving me the opportunity to review it. With the upgrades, this kit compares favorably to the higher-priced resin ships one sees at contests. Stay tuned to this channel for Part II next month!