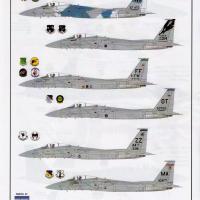 This is the third set of 1/48 decals from Speed Hunter Graphics which came out of the Reid Air Publishing Group. The decals look very nice, clear and in register. They are printed by Cartograf of Italy and work very well, I’ll tell you why in a bit. This offering covers six F-15C MSIP II Eagles with a nice mix of Mig killers, commanders' aircraft, and even an aggressor bird. You couldn’t ask for a more varied mix. I couldn’t find whose kit these decals were sized for on the instruction sheet but on the web site it was recommended for the Hasegawa F-15C. As fate would have it, I only had the Academy kit which seemed to work quite well. I also noticed that the site had selections for 1/32 and 1/72 size sheets. I do hope that they branch into the other scales because these decals are really worth it.

The options included in this set are:

The hard part was to decide which Eagle I wanted to do. To make the choice easier I decided to ask my wife which one she liked. She picked the California ANG one that had the eagle coming down the tail. While I was placing the eagle on the tail it started to turn under on its self. I thought I was going to have to pick a different version because I was sure that I had just ruined this decal. Luckily, I was wrong and was able to actually lift up the decal and straighten everything out. I was really impressed with this. The decals aren’t too thick and worked well with Micro Set and Micro Sol.

I highly recommend these decals. They look great and are made well so they don’t rip while placing them. They also come with enough of the common markings to do three of the planes on the sheet.

I would like to thank Speed Hunter Graphics and IPMS USA for the chance to review this item.

Close up of decals on model